Andy Mann’s videos are classic examples of the “street tape” genre—a video equivalent of “cinema verite,” drawn directly from life, with a minimum of staging, acting or editing. The direct, candid style of Mann’s tapes reflects the enthusiasm sparked by the new equipment amongst a whole generation of first-time video users; the possibility of capturing subjective experiences and details of the world in which one lived was tremendously exciting at that time, and was reason enough to go out and shoot a video. Mann was an original member of the guerrilla collective TVTV (Top Value Television), one of a number of alternative media groups formed to challenge the supposed objectivity and hegemony of commercial television. Mann also executed a number of video installations during the 70s that stretched the boundaries of video’s range with implied connections through dead (non-televised) space.

"I have always wanted to work as economically as possible, and have been happy to settle for the available quality of small-format video rather than going to more time-base stable formats which cost too damned much to use and are rarely portable.” 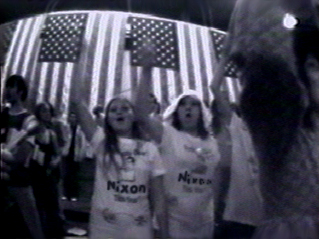