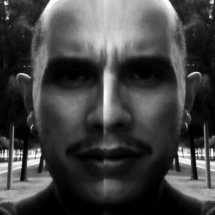 Adrian Garcia Gomez is an interdisciplinary artist working in film, video, photography, and illustration. His artwork, which is largely autobiographical and often performative, explores the intersections of race, immigration, gender, spirituality and sexuality. He studied photography and non-western art history in San Francisco, 16mm filmmaking in Mexico City, and video in New York City. Originally from California, he currently lives and works in New York.

I’m first-generation Mexican-American; I migrated to California from Jalisco, Mexico with my mother when she was six months pregnant with me. I was born and raised in California but have moved around the world a bit; I've lived in Mexico City, Barcelona, New York, London, Tel Aviv, and Geneva. I have a theory that my initial womb migration propelled all the other moves.

I’ve always made things; I started drawing when I was very young (horses and princesses when I was five years old) and eventually moved into lens-based media while at university. First photography, then 16mm film, and now video. My initial interest in studying 16mm filmmaking stemmed from the desire to add movement to my drawings. The move to video has been wonderful in that it has allowed me to move around and work independently, and inexpensively, with very few tools (my phone, laptop, and an internet connection).

I completed my first degree in San Francisco with a concentration in photography and art history. I later studied 16mm film production in Mexico City and then got an MFA in Photography, Video, and Related Media in New York. I didn’t plan to study art history as an undergraduate; I took a class on Mesoamerican art history and continued with classes in art history of Africa and the Caribbean. The classes were eye opening, aside from learning about my own history, they made me think about which stories are told and which are erased.

Like most artists in my small community, I don’t make a living through my videos. I am happiest when I’m working on something, so I manage to fit art making into my life. I also have an incredibly supportive husband who allows me time away from a day job to focus on art-making.

My work is largely autobiographical; I’m interested in sharing stories and experiences that have been largely ignored or misrepresented in the art world and media at large. There is a power in telling your own story to challenge and complicate the usual narratives told about Mexican and queer people. I’m also very interested in seeing how others with backgrounds similar to mine experience their image reflected on-screen.

We’ve moved around a lot in the last year (four cities, three continents), I don’t recall the last exhibition I saw. But if I interpret this question as moments of inspiration, I have vivid memories of walking into the Mediterranean at sunset for twenty-one consecutive days, of watching clouds clear to reveal the snow-capped French Alps, and of sitting in Central Park with my three and four-year-old nephews as they describe a huge thunderstorm whose winds rattled their windows in the middle of the night. BOOM!

I didn’t get to attend, but my video La Mesa screened at Edinburgh International Film Festival in an incredible program inspired by the work of Barbara Hammer.

I’ve started work on a video about my mother and I moving to California from Mexico together. I wouldn’t usually write about a piece at this stage as it’s not much more than a series of disparate scenes right now, but at the moment I’m thinking about the links between misogyny and homophobia… but I have no idea how it will grow from there.

I usually begin with a very simple gesture or action; my process tends to be very loose and malleable — the piece develops as I work. It’s finished when it tells me it’s finished, but I usually carry on some part of my last video (image or sound) on to the next project, so in some ways it’s never done.

Thank you VDB for supporting my work!   Interview conducted, August 2019