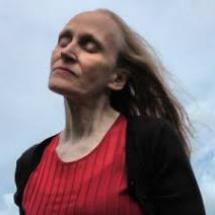 Since the early 1980s, Cecelia Condit’s narrative videos have explored the not-so-average experiences of the “average woman” in a social climate of sublimated violence, fear, and misogynist aggression. Her dark-humored works conflate fairy tale morals with the grisly sensationalism of tabloid headlines, incorporating live action, appropriated television images, and original music into frequently operatic narratives. Condit is a Professor Emerita of Film and Video at the University of Wisconsin-Milwaukee.

I was raised in an old house tucked deep into the woods of Philadelphia. There were streams on three sides and the only entrance was a windy dirt road filled with endless pot holes and mud. Though beautiful, it was also isolating. Subjected to intense sibling bullying, I struggled to define myself, and my image as a girl. Looking back, I was always making books filled with drawings of women. Even then making art was my way of exploring who I am — all the while keeping my head down.

My parents were both artists/painters so from an early age they had a natural influence on my becoming an artist. Being epileptic limited my options, and I rationalized that making art might allow me to express all those crazy, raw emotions that loomed so heavily on me when I was young. When I discovered video, my need to tell stories found a home. Video also allowed me to work free from the baggage of history, and traditions where I felt I might be excluded.

I did, but not in film. I studied at the Pennsylvania Academy of Fine Arts and at Philadelphia College of Art where I received a BFA in sculpture. I later received an MFA in photography at the Tyler School of Art, Temple University. Later, my education grew more out of my experiences teaching. It seems that one never learns a subject better than when one must teach it.

I’ve never made a living from creating art, though because of my intense art practice, I was able to teach filmmaking and digital technologies at the university level since I was 30. I’ve received large grants, but the predictability that I needed to support my family took center stage. It seems forever that I have balanced a job, artmaking, family, friends, and walks in the park. Now that I have stopped teaching, the balance continues, but with much more time to make art.

It is wonderful seeing museums and gallery shows that reach out in unexpected ways that inspire and humble me. I am also influenced by small things — shared adventures, tea and dinners with friends, paths and pathless woods, large bodies of water and rock outcroppings.

I simply try to pay attention to what is happening in the world, and how artists of various backgrounds and mediums offer new insights into our world culture. Environmental conservation, human rights (or the lack of), and feminist movements such as #metoo all are very important to me. It seems that we need to open up new spaces for old stories, stories that have been ignored, dismissed, and suppressed. For me, these stories represent the fabric of these changing times and need to be heard loudly. Recently, I read a book by Soraya Chemaly called Rage Becomes Her where she writes that we must reclaim our anger, as anger is the “first line of defense against injustice.” We must all be aware that the ubiquitous, lethal game of ‘power over another’ should make each of us angry, and that it can and must be stopped.

The last exhibition I saw was at the Lynden Sculpture Garden in Milwaukee, Wisconsin. Rosemary Ollison has a solo exhibition called Prosperity in a Million Scraps, where she has cut up clothing she’s found in thrift shops, and made huge wall hangings and wildly fascinating dresses. Rosemary’s philosophy on making art is that it doesn’t require a great deal of money. Also, her art practice seems to grow out of a spiritual place full of energy, guidance, and protection.

One of my favorite screening experiences was showing We Were Hardly More Than Children (2019) at the Ann Arbor Film Festival. As unlikely as it seems, I was the only artist present in my screening group of short works, so I alone spoke during the Q&A. It came at such an important time for me, as I needed to tell this story and I needed to feel heard. Also, I believe it was somehow important in We Were Hardly More Than Children receiving the Eileen Maitland Award for the piece that best addressed women’s issues and elevated female voices. An honor indeed!

Having finished We Were Hardly More Than Children, I am now working on several videos that may turn into one larger project. First of all, I am collecting stories about abuse inflicted by family members and partners. These tales of abuse are varied, but the patterns are the same. Strangely, only the details and the severity change. I am also working on an environmental fairy tale that is both a universal yet personal creation story. It involves photographs that my son Lloyd Vogel took for me while leading a backpacking expedition though the Brooks Mountain Range in Alaska. Ants walk across the photographic images, and I place pebbles on the men’s heads — they are like masks, disguising them.

Usually I know the subject of a new piece before I finish the previous one, but I don’t always know the form or direction it might take. I tend to sketch and collect images until it becomes clear. As for when a work is complete, I think I am done when I can’t take any more or something changes to the story that is so big, that it makes scene to open it up again. There are enough autobiographical elements to my work that make finishing a video tougher and not easier these days.

I’ve been reading Where the Crawdad’s Sing by Delia Owens, The Rise and Fall of Dinosaurs – A New History of a Lost World by Steve Brusatte, and Rage Becomes Her by Soraya Chemaly. The other night I watched Black Mirror on Netflix.

12.  Room for final thoughts: The internet is a great screening platform and bridges the gap between high art, low art, the private and public. It opens a door to people everywhere. My own intense internet experience began when an excerpt from Possibly in Michigan (1983) made the front page of Reddit in 2015. Then in the summer of 2019, sixteen-year-old Vris Dillard uploaded a 20-second musical clip from Possibly in Michigan onto TikToc. It became part of a crazy viral phenomenon with thousands and thousands of performances lip syncing to Karen Skladany’s song “Oh no, no, no, no…silly”. Then YouTube kicked in recommending Possibly in Michigan to web surfers from all over the world. The number of “views” and “likes” has grown and my email became a connection to people I will never know. I find that some of these email letters can be touching, coming in waves — as though passed from friend to friend. Some of the emails are funny: “Would you be my grandmother?” All have been respectful and thoughtful, but with this enormous exposure, I have had a sense of vulnerability that is a bit unnerving. I try to cherish it. It seems for some people, my other short videos, are a place not just of death, but sanctuary. They write that if I can move through such difficult experiences, perhaps they can too.