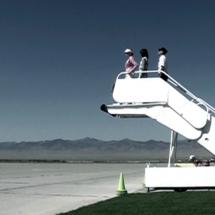 Since 2001 Franziska Lamprecht and Hajoe Moderegger have been collaborating under the name eteam.  Most of their projects are based on random pieces of land they buy on eBay or in Second Life.

eteam's projects have been featured at many venues, including Art in General, P.S.1, and Eyebeam in New York, MUMOK in Vienna, Neues Museum Weimar in Germany, the Nelson Atkins Museum of Art in Kansas City, and the Museo Nacional Centro de Arte Reina Sofia in Spain.  eteam's videos have been screened at the Transmediale Festival in Berlin, the Taiwan International Documentary Festival in Taipei, the New York Video Festival, and the 11th Biennale of Moving Images in Geneva.  Moderegger and Lamprecht have received funding for their work from Art in General, NYSCA, Rhizome, the Experimental Television Center, the Henry Moore Foundation, and an Emerging Artist Fellowship Grant from Socrates Sculpture Park in Queens.  They have been awarded residencies at the MacDowell Colony, Yaddo, Smack Mellon, Eyebeam, Harvestworks and the Center for Land Use Interpretation.  Most recently they have been awarded a Creative Capital Grant for their project open source Grabeland.

Winners of the Videoförderkunstpreis Bremen, 2008/09.

Also available from eteam is the book Buzz Cut. 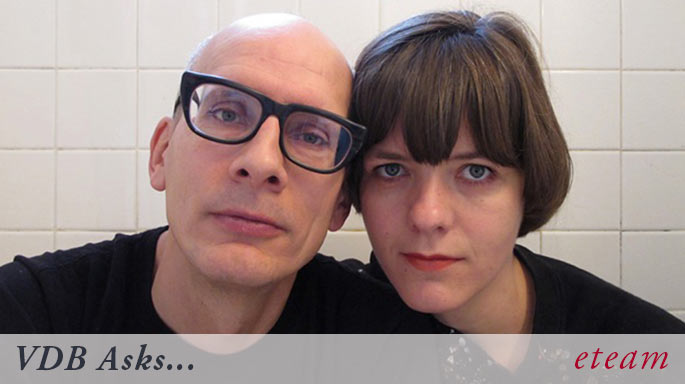 Hajoe was born in Pennsylvania, but we both grew up in Germany, one in the East, one in the West.

Video combines all the things we like to do. It creates images, captures time, records evidence and a soundtrack, tells stories, and encourages people to do things in front of it. The video camera fits in a bag, one can take it places. It is an affordable, transportable tool. It does not require a high level of skill to handle the technical part and one does not need a studio to store the materials for a video production.

Yes, we went to the Bauhaus University in Weimar. That's where we met.

To make art is what enables us to live the way we want to live, and we feel fortunate to be able to have it that way.

We rely on chance, some kind of planned chance. Through eBay-land purchases we drop ourselves into foreign environments in which we have no reason to be, besides the random choice that brought us there. We end up where we end up, because we bid on the cheapest land available. Those are the places, where money has lost its influence. The infrastructure of the market is broken; if it exists at all, it’s a dirt road that leads there.

Neglected, forgotten, off-the-grid kinds of places raise our sense of awareness, because they don’t seem to cater directly to people. Maybe they used to, or they will, but their current state exists not because of people, but because of something else. And what that is, is interesting to us.

We like absurdities. Paradoxes. We know there is something that needs to be pursued when we get giddy, frightened, and sweaty under the armpits. It also has to make us groan. Part of our practice is to be stuck, being held up, somewhere “out there”. We put ourselves in situations where there are chances to be taken hostage by something that appears… appears to be very logical, and then appears to be completely unreasonable. Or sad, while being funny.

If we encounter things we can grasp but do not understand, we come up with hypotheses about the inherent yet undiscovered possibilities of such things or places, or people, and start to collect, calculate, document, undermine, and fake the facts and evidence in order to test these hypotheses. Since we have no formal training in analytical research, we employ a mix of methods to make it work, use what is available  -- gestures, quotes, costumes, and facts from scientists, detectives in novels, investigators, journalists, historians, magicians, the military and eyewitnesses. Eyewitnesses are the key to getting closer to the truth. Once we have an eyewitness we have a real case, because eyewitnesses are unreliable, hence more engaging then facts. People want to believe, have faith, and trust in more than the obvious. Broken windows can only communicate in a broken window kind of way -- but an eyewitness can add that extra dimension that makes the story compelling.

We are interested in what CLUI does. We like Jill Magid’s work. We are reading Thomas Bernhard, W.G. Seebald, John Berger, Dostoyevsky. We go on Facebook and click on the links that our Facebook friends post. We read books that our writer friends wrote. Among Murderers by Sabine Heinlein. The Beginners by Rebecca Wolff. The ticking is the bomb by Nick Flynn. When we are in upstate NY we listen to the radio station WGXC. We spend a lot of time at Goodwill stores, and we used to spend a lot of time in casinos playing the slot machines. We talked to the guy who programs the “winnings” of these machines. The chance to win on a slot machine is 97%. They make all their money from the 3% programmed loss.

We visit teenage fashion blogs for eye candy. We keep re-reading parts of the Warren report, because we ran into one of the eyewitnesses of the JFK assassination in Dallas, Texas. Last week we went to hear Bobby Previte and one of his bands jam. We follow digital developments, and are currently reconsidering cloud storage, online privacy and trying to catch up what’s going on with whistle blowers, leakers, off the grid Internets, surveillance, and personal rights while figuring out how to ripen green tomatoes. In the past months we saw videos by Deborah Stratman, Jackie Goss, Shana Moulton and Deville Cohen.

Paul McCarthy at the Armory and Better Homes at the Sculpture Center NY.

Taipei International Documentary Festival. A big sold out theater and Mandarin subtitles which, as we realized when our translator translated them back to us, had turned our story into a completely new story. Since the audience seemed to like the new story, we wondered if they would have liked the original too, but there was no way to find out. The whole experience was perplexing, hence interesting.

We are finishing a book, called OS Grabeland. The story takes place in a country that does not exist anymore. It’s a global story, yet it happens in total isolation. A pair of New York City residents, originally from Germany, buy the cheapest parcel of land they can find in Europe for sale on the Internet. In their role as American capitalist landowners they then search for ways to relate to their tenants — a group of elderly East German gardeners — who use the land exclusively for growing vegetables and fruits.

Successively, the plot of land is turned into a luxury cruise ship, which embarks on a six-day transatlantic land cruise that carries the remaining tenants to NYC. From there, the journey continues for a year across America towards the West. The group travels mostly in a horse wagon, and under such influence the North German landscape turns itself into wide, open prairies populated with romantic idols of Native Americans and well meaning German “white faces” on horses, while the “Neo-Nazi-Artamanen” stay hidden in the forests. America presents itself comprehensively from McDonald’s to Mickey and Minnie in their castle, through vast mono-cultured prairies, from bagels, donuts and Coca-Cola to “Little Texas” — a flourishing Western cowboy town on a horse farm situated five miles away from the original garden plot. There, since the collapse of the German East, a group of unemployed “authenticers” have started a new life, settled down in a time when the American West was won, and authentically, as they insist, live the frontier life of first-generation immigrants without electricity or running water.

The piece usually starts itself, and it ends exactly one second before we get a divorce over it.

Oh, we already answered that.

Artist(s)
eteam
Single or Compilation Product
The Backup Tapes from Moon and Mars
Track One
Prim Limit
Truth in Transit
The Paradox of the 10 Acres Square
1.1 Acre Flat Screen