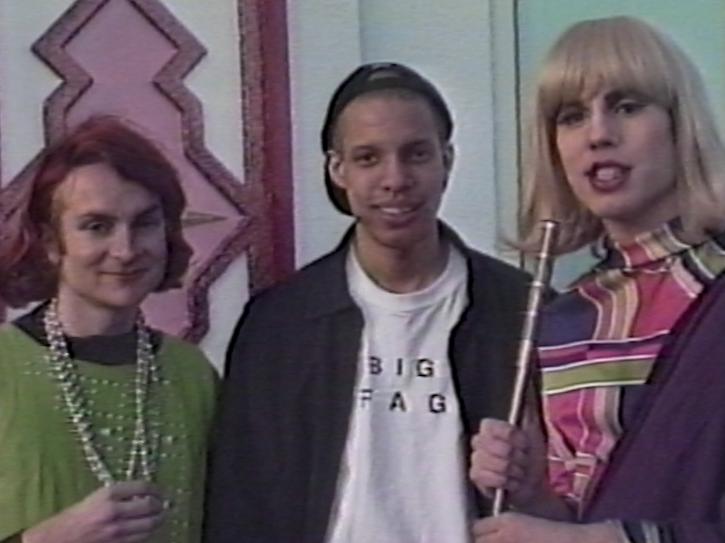 Glenn Belverio is an independent film and video maker who lives and works in New York City. He began producing and co-hosting the popular Manhattan Cable series The Brenda and Glennda Show in 1990, a talk-show that took the art of drag out of the nightclubs and into the streets, mixing politics with humour. In 1993, the series became Glennda and Friends, a post-queer talk show featuring provocative co-stars such as gay pornographer Bruce LaBruce and guerrilla scholar Camille Paglia. Belverio and Paglia's collaborative project Glennda and Camille Do Downtown later became a short film, and was well received at the 1994 Sundance Film Festival. Glenn's work has screened at venues such as the Institute of Contemporary Arts, London, UK, and the New Museum, NY. Glennda and Camille Do Downtown won the prize for Best Short Documentary at the 1994 Chicago Underground Film Festival.

I grew up on a farm in the middle of the woods in the rural township of Hope, New Jersey. (Its claim to fame is that Friday the 13th was filmed there — our driveway makes an appearance.) I have an Italian-American working class background — I worked on the farm and also in my father’s uniform factory, which was in the basement of our house, sweeping floors as a kid, and cutting fabric and sewing buttonholes as a teenager. I moved to New York City in 1987, shortly after I graduated high school, as one does when you’re gay in a small rural town, and dove into the city’s nightclub and art scenes. The only skill I thought I had was cutting fabric, so I got a job in the garment district at a place called Holiday Togs. Somehow after dancing to the B-52s and Cher songs until 4 a.m. at Rock ‘n’ Roll Fag Bar every Tuesday night, I was still able to crawl into work by 9 a.m. After I got laid off from Holiday Togs, I got a job working for a fashion designer named Sylvia Heisel, who had a studio in Soho, in 1991. She designed for celebrities and collaborated with artists, so it was an exciting place to work. Memorable moments included measuring Matthew Barney for a dress, walking up 10 flights of stairs with Aretha Franklin (she refused to take elevators), escorting Sonia Braga to a party, and helping a distraught Tina Weymouth choose clothes for a Letterman appearance as she bitterly complained that David Byrne wouldn’t return her calls. 2. What inspired you to become an artist? To use video? I was inspired by my street activism with ACT UP (AIDS Coalition to Unleash Power) and WHAM! (Women’s Health Action & Mobilization), and also the drag queen scene at the Pyramid Club on Avenue A. Brenda Sexual (Duncan Elliott) and I wanted to do something for cable TV that was political but also didn’t take itself too seriously — so we combined activism and drag.

3. How do you balance life and art? Are you able to make a living through creating art?

I made my videos from 1990–1996 and even though I received several grants to make my work, by 1997 I decided I could not make a living doing this. So I returned to the workforce, first as an assistant fashion stylist, then as a journalist and fashion editor, and finally as a marketing copywriter for brands like Bloomingdale's, Victoria’s Secret, and Tiffany’s. Over the years, my creative outlet has been writing, such as reporting on fashion and travel for my friend Diane Pernet’s website. In 2006, St. Martin’s Press published my nonfiction book Confessions from the Velvet Ropes.

4. What influences or motivates you in the world?

New York City continues to motivate and energize me — despite all the wretched changes, I still think it’s the greatest city on earth. My travels, particularly in Italy and the UK, are inspiring. But mostly it’s my friends who inspire and motivate me. I’m lucky to have a wide range of friends around the world, of all ages and persuasions, and I love listening to their stories.

5. What artists or movements are you following right now?

I currently work at MoMA (as their retail content manager), so I’m blessed with constant exposure to artists’ work I had not previously seen, like Betye Saar, Pope.L, and David Tudor. I’m also a big fan of Rachael House, a punk feminist artist from London whom I recently met in Bristol. We both had work in the Still I Rise exhibition at the Arnolfini Centre for Contemporary Arts last year. And then of course, there’s Vaginal Davis, whom I’ve known since 1992.

6. What was the last exhibition you saw?

The Sur Moderno show at MoMA is terrific. It features the work of South American modernists. There’s a Brazilian film from the 1970s which is mesmerizingly beautiful.

7. What has been the best screening experience of your work?

When the 16mm version of Glennda and Camille Do Downtown premiered at the Sundance Film Festival in 1994, there was a pair of lesbians sitting in the front who were NOT happy with anything Camille Paglia had to say in the film… so they started yelling at the screen and “arguing” with Camille as if she could hear them (Camille was not present in the audience)! It was hilarious, especially since I was sitting right across from them and they knew I was the director. Elsewhere, Glennda and Camille caused an audience riot during a screening at a gay festival in Minneapolis. Alas, I was not there but it made the newspapers. My 1996 retrospective at the ICA in London, curated by Video Data Bank Director Abina Manning, drew controversy because the Royal Arts Council, who provided funding to the ICA, thought we were showing porn because of my name, Glennda Orgasm. Buckingham Palace ordered my videos to be sent to them for review by the Arts Council, a group of older gentlemen. After chatting about rugby for a few moments, they watched my tapes and said, “Oh, well, there’s nothing wrong with these.” The incident traveled stateside and ended up as the lead item on Page Six of the NY Post!

8. What are you working on right now?

Right now I’m focused on helping VDB promote my newly digitized archives — tapes from 1990-1996 — so that new generations of viewers can see them and learn how Brenda and Glennda helped pave the way for drag queen and LGBTQ+ acceptance on TV and in society in general.

9. How do you start a piece? How do you know when a work is complete?

My videos all came about very spontaneously. Like, I would wake up one morning, walk into the kitchen and say to Brenda, “I think we should go to Atlantic City on Saturday with a big group of drag queens and film it.” The completion of each tape started with me viewing hours of raw footage, making copious notes, tracking down supplementary clips, music and images (mind you, this was before the age of the Internet), and then meeting with my co-producer Stevin Michels in the editing room to collaborate on the final edits. When we had the montage for the closing credits stitched together, it was a wrap.

10. What are you currently reading? Watching?

I’m currently working my way through the recipes in LIBERACE COOKS! (sort of like a queer take on Julie & Julia). The great Liberace co-wrote the cookbook in 1970 with Carol Truax and the accompanying photos of Liberace’s seven dining rooms are a camp extravaganza — and some of the recipes are quite good. As one of my Parisian friends put it, “Not everyone learns the art of soufflé from Liberace!” I treasure this book because it’s forced me to learn a lot of classic cooking skills that I’ve never attempted before. I’m also reading Debbie Harry’s brilliant memoir Face It. Never mind the so-called facts regarding Ted Bundy — believe Debbie’s version!  Some of the shows I’m watching are Ramy on Hulu (terrific first season and can’t wait for season 2) and also Showtime’s Work in Progress, a series set in Chicago about a self-deprecating 45-year-old queer dyke who is dating a trans man in his early 20s. I’m old enough to remember the SNL character “Pat” played by Julia Sweeney (an executive producer of WIP who appears as herself), which now seems innocent and naïve in light of today’s omnipresent discussions around gender identity.