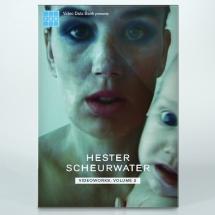 Can you tell us something about your background?
Hester Scheurwater (1971) studied monumental art at the Royal Academy of Fine Arts in The Hague. Under the guise of self-portraiture, she investigates and critiques the role of woman as sex object. Photographs taken of herself posing before a mirror reflect both Scheurwater's inner thoughts and outward appearance.

The mirrored self-images are my way of reacting to the imitated and fake media images which are constantly calling upon our imagination, without intending to be taken too seriously.  I try to deconstruct this call's effect with my reactions by switching the 'subject-object' relationship, without being victimized by it.

Scheurwater's work is known for being sexually explicit. The images can be shocking, and prompt discussion about the purported sexualization of society. At the same time, her works also share links with international feminist art practices. Scheurwater’s videos have been part of feminist programs and exhibitions, including those at the Brooklyn Museum (New York) and the Blanton Museum of Art (Austin, TX).
What inspired you to become an artist?  To use video?
As I was a little child I was already pretty sure I would become an artist. I come from an artistic background -- though my parents aren’t artists, they always encouraged me to become one. My aunt Marijke Kentgens (who sadly passed away recently) taught at an art school and was a big inspiration for me. I used to accompany her from time-to-time when she was teaching. After art school Frans Zwartjes inspired me to work with video and I became his student, and later assistant, at the Vrije Academie in The Hague.
Did you have formal art training/schooling?
Yes. The Royal Academy of Fine Arts in The Hague, and afterwards De Vrije Academie.
How do you balance life and art?  Are you able to make a living through creating art?
I am not balancing that much. I am pretty much obsessed, but creating when I can, especially on holidays. My husband and kids are always telling me to stop when I am shooting on a holiday location; on the other hand with a family and kids you need to have balance if you want it or not. I make a living by teaching, through grants and selling work.
What influences you or motivates you in the world?
I have this strong convicted feeling or urge that I have to ‘fight’ for female sexuality and to get rid of all the preoccupations.  My work shows I am not a victim of an imposed and sexually charged visual culture. Instead I give a self-aware answer in which I try to show my feelings and/or views about the unreal and fake imagery which is forced upon us daily.
Twisting and turning role patterns and opinions of the man-woman domain through status-updates, I evoke and mirror the reactions to my work, visualizing the hypocrisy. Sometimes, this reality turns out to be confrontational. Disputed values that are hidden or ‘eased’ out by traditional media channels suddenly become the subject of discussion on the Facebook platform as well as in traditional media. The interaction between creator and receiver is an important element of my work. It therefore is not just about me, but also about social perceptions.
What artists or movements are you following right now?
I see a lot woman artists working with female sexuality in a very strong way.
What was the last exhibition you saw?
The Nofound Fair in Paris during Paris Photo.
What has been the best screening experience of your work?
Although I did not attend, I am very happy with the screenings at the Elizabeth A. Sackler Center for Feminist Art at Brooklyn Museum in New York.
What are you working on right now?
I just finished a book called Shooting Back edited by Walter Keller.  I’m making new work, and have an upcoming solo show in Belgium.
How do you start a piece?  How do you know when it’s finished?
I just start with a very strong need to make a new piece. I never know for sure if something is ready, it is just a feeling.  Mainly I show the piece to one or two people, and if my feeling is still there, I am sure.
What are you currently reading? Watching?
It is really terrible, but I am too busy to read. I was reading The Story of O by Pauline Réage but I didn’t finish it yet.  I watch the daily news.
Room for final thoughts…
“It is exactly this lie that Hester addresses. I call it a lie because that image world, or that world of the image, derives its shape and significance from the way all of us together deal with it, driven by desire and repression, fear and lust, the hunger for power. How we constantly want to make sense of a world that often is – or will become for that reason - a vicious reflection of the random bunch of totems and taboos created and maintained by society, and used by people to exploit each other to the point of perversion.

And that is what Hester Scheurwater is pitted against with her images. As a visual artist she understands that by attacking the apparently neutral world of the image, social, political and ideological issues are touched upon. And above all she understands that the battle must be fought in the field of aesthetics, of visual language.

By being disruptive, precisely there, through agitation, confrontation, deception and challenge, the lie becomes apparent. The texture of our social life is bared. It is demonstrated that the personal – that which is private – is still political, despite the emergence and popularity of social media, signifying that it is part of a power game with the body at stake, and specifically – or should I say still, because it has been like that for ages - the female body.

How very courageous it is therefore that she, as a woman, puts her own body at stake in fighting this battle. That she pinpoints exactly those limits of social tolerance which are preferably left unseen, also in those places where it is feigned that limits between private and public no longer exist. That everything is possible. Where an ideology that attributes social characteristics to technology reigns supreme, as if that is the way in which humanity can be freed from the big lie.
Other great female artists have preceded her and have also inspired her. Marina Abramovic, Elke Krystufek, Sanja Ivecovic, Martha Rosler, perhaps Cindy Sherman and others have, each in their own way, shot back, have obstinately and provocatively burst the bubble of the over-eroticised, objectified, ostensibly marketable and interchangeable female body. Hester Scheurwater carries on the fight in a contemporary manner, with seemingly “minimum resources – using life.””