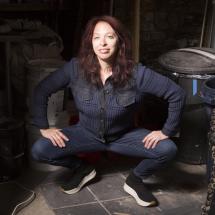 Laura Parnes’ critically acclaimed moving image works and installations address counter-cultural and youth-culture references where music is integral to the work. Her work engages in strategies of narrative and experimental film and video art to craft loose narratives of trauma and repressed memory around mass-culture experiences and youthful rites of passage. Using historical, literary, and popular culture based references, she addresses issues related to cultural production and societal malaise.

I was born in Buffalo, moved to Philadelphia, and “summered” in Detroit. To be more specific, I grew up in the mostly white, mostly Christian, mostly middle-class suburbs outside of these dying industrial cities. Despite the neo-Nazis next door, I have fond memories of Buffalo. As a child, being immersed in all that snow was like living in a sculptural medium where you could carve, shape, and re-carve your own world — and sometimes you needed to. We were the only Jews in the neighborhood, and our next door neighbor would occasionally march in front of our house saying “Hitler was right!”

Though my mother was an engineer and my father a mathematician, my parents were always interested in the arts, and my mother would take me to museums regularly. My father was an art-film buff, and would take me to many angst-ridden, extremely difficult films. For instance, Schlondorff’s adaptation of Günter Grass’ The Tin Drum, a dark comedy taking place in Germany during World War II about a boy who rejects his pathologically conservative, fascist, bourgeoisie society by intentionally stunting his own growth. Oscar, the protagonist, was more of a punk singer than an artist, yet his perverse act of resistance resonated with me.

As an undergrad at Tyler School of Art, I was really interested in text work and performance, but I was a painting major. I felt a strong connection with some of the visiting artists like Ilona Granet and Vito Acconci, but it wasn't until I graduated that I began to really immerse myself in multi-media installation, film, and video.

I'm a visiting artist and critic at numerous academic institutions.

I’m interested in a wide range of things from theoretical texts to popular culture.

County Down screened at MoMA, and I have to say the quality of the projection and the massive screen was really satisfying. Kate Valk brought Elizabeth LeCompte and Frances McDormand, and at the bar afterwards, Frances came up to me and started imitating a character in the film. I’m not one to be impressed with celebrity, but this was a really uncanny moment.

An experimental documentary that explores the rise of the right in online culture and their consistent attempts to co-opt counter-culture.

I might start a piece, put it away for five years and then pick it up again. I like to let things ruminate. I need a deadline to finish it. Or to quote my editor friend, “I don’t finish it, it gets taken away from me.”

Books: Queer Theater by Stefan Brecht, The Old Drift by Namwali Serpell, The Reactionary Mind by Corey Robin, and The Mueller Report. Re-watching: Us by Jordan Peele.