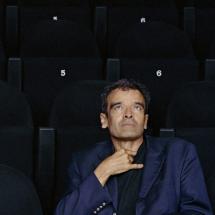 The world of cinema lost a comrade in July with the sudden passing of Harun Farocki. Video Data Bank Director Abina Manning will present a tribute to the artist at the 43rd Festival du Nouveau Cinema in Montreal.

Harun Farocki (1944–2014) was born in German-annexed Czechoslovakia. He began making experimental essay films in the mid-1960s, eventually producing more than 120 works, many of them using found images – educational films, equipment demonstrations, video games, war footage. Farocki’s longstanding social engagement was reflected in his work, whose primary concerns were society and the ways that images are used to shape a population. Video Data Bank is proud to represent Harun Farocki's film and video work, and to present this retrospective in collaboration with the Festival du Nouveau Cinema.

In Workers Leaving the Factory, with nods to Chaplin, Pasolini and Lang, Farocki examines the factory gates as site of social upheaval. Perhaps his best-known film is the agitprop essayInextinguishable Fire, an examination of the production and use of napalm during the Vietnam War, the complicity of U.S. manufacturers, particularly Dow Chemical, and the role of labour. Commissioned by the Lille Museum of Modern Art to produce a video self-portrait, in InterfaceFarocki contemplates his own working methods, using gesture and montage to examine his changing production processes.

Bricks: all around us, perpetually unnoticed. In Comparison visits brick production sites to examine how increasingly mechanized modes of production have changed the ways that communities relate to their work and to each other. I Thought I Was Seeing Convicts uses surveillance footage from a Californian maximum-security prison to expose the chilling cruelty of the panoptic prison yard. When inmates fight, they are shot, and sometimes killed, by their guards. The Parallel series explores the image genre of computer animation; Parallel I focuses on trees, water, wind and clouds.

What is now Farocki’s last “film-word final” is a sad reminder of what has been lost. An architectural firm is the type of workplace that is not often explored, for unlike what we see with other Gods of Faustian dimension (doctors, not warmongers), doubt often haunts the very actions of the language used to describe the decision-making process. Farocki eschews the impulse to invest in a query of scale, or an investigation of the miniature versus the mechanics. His camera finds the colours and the kids – the Sauerbruch Hutton team, based in Berlin since 1989, renowned for their fondness for hues and contours of colour applied to buildings and backgrounds. In the course of the visit, they embark on a bit of Meta, a virtual reality centre in Laval, a project that allows the user to engage with the fluidity of text as blueprint – the words “digital canteen” combined with bright sketches are spoken almost giddily, and Farocki’s gaze seems to greedily delight in this child’s play of ideas and the manual dexterity of the brainstorm.