In the video Glennda does DC, Glennda interviews people in Washington D.C. about the topic of gay rights. As the National Gay and Lesbian Task Force Conference is going on simaltaneously, she asks people if they were aware of this, and if they believe that there should be a gay rights bill.

In Greetings from Lanesville, the Videofreex tour the countryside of Lanesville, New York interviewing the local people for a weekly broadcast program all from behind the wheel of the Lanesville TV Media Bus. As the first localized pirate television station, Lanesville TV brought its guerilla broadcasting to Upstate New York with interviews of ordinary townspeople in an effort to present an image of community created by the community itself. 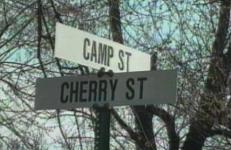 This tape, Harriet, created by Videofreex member Nancy Cain, unfolds much like a short play or literary character study. With very little directed dialogue, we gain intimate entry into a day in the life of Harriet—a long-time resident of Lanesville and mother of five—over the course of one day. No stranger to the Videofreex, Harriet was a frequent guest on the collective’s television production of Lanesville Television, as both an on-screen visitor and routine hotline caller. 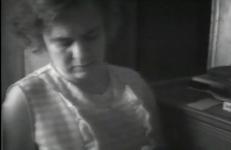 Glenn Belverio
In the Queen City: Part One, 1990

In this video, Glennda Orgasm and Jackie Offie attend Lollapalooza '95 on Randall's Island, New York. Glennda and Jackie sing punk rock songs on the drag stage, and Glennda challenges Courtney Love to a fistfight. The video also shows other performances on the stage, and features Bruce LaBruce's music video for The Riverdales' Fun Tonight.

Among the handful of video recordings of Lanesville TV that exist today, this tape is particularly special for its documentation of one of its very first programs to run on the air. The tape captures the energy and excitement of the Videofreex as they prepare to go live, and Parry Teasdale taking calls during the show to drum up interest and also monitor sound quality. 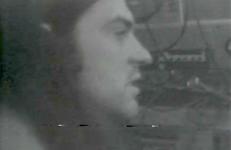 This tape includes footage of one of the first broadcasts of Lanesville TV, as it appears on the television set of Lanesville local, Todd Benjamin, and a television set installed in a public bar. Interwoven with shots recording the program’s reception, are segments recorded for Lanesville TV itself: Bart (playing the part of “Russell”) approaches Parry, dressed as a hillbilly car mechanic “fixing” the VW Van; nearby, Nancy opens the door to a cabin, wearing a bonnet, while Carol and Chuck, crowding behind her, play the part of other Lanesville TV protagonists. 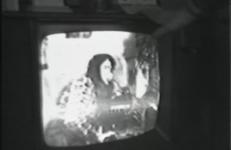 On April 6th, 1974, this episode of the Videofreex’s production of Lanesville TV aired, including four segments: a choreographed piece by the Elaine Summers Dancers, a Vietnam tape titled “Where do you get your money?,” several phone conversations with local audience members, and a comical interview with a fictional fish, Sam Trouta. 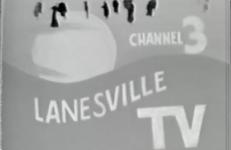 Videotaped on August 13th 1972, this tape features a number of scenes shot for Lanesville TV, including the Videofreex at the Catskill Game Farm shooting footage of the animals. There are some oddball images… a woman on an exercise machine, and someone in a gorilla suit brushing their teeth. A man named Steve Toomie from Tannersville, NY talks about Mountaintop Youth Group’s performances. There is the horse riding competition in Hunter. A little girl asks, “Are you the Lanesville Television guy?” and then shows her horse ribbon to the camera. 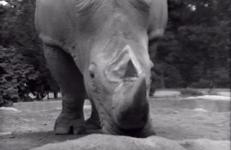 Videofreex
Last Party at West End Avenue before Leaving for the Country, 1971

In this video, the Videofreex host a party during which the main source of entertainment is a video-television feedback loop. In one room, a video camera linked up to a television set allows party guests to see themselves, as if in a mirror, while guests in the other room can also watch the recording, and may speak to them through a microphone. Although the voices of the off-screen guests can be heard on the tape, they are always imageless. 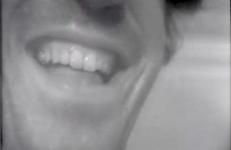 In this video, Brenda and Glennda attend and interview participants at the 1991 New York City Pride March. Speaking with a range of attendees, they underscore the significance of non-white queer communities, diverse gender and sexual identities, and political causes at pride events.

Merce by Merce by Paik is a two-part tribute to choreographer Merce Cunningham and artist Marcel Duchamp. The first section, “Blue Studio: Five Segments,” is an innovative work of video-dance produced by Merce Cunningham and videomaker Charles Atlas. Cunningham choreographed the dance specifically for the two-dimensional video monitor screen. Atlas uses a variety of video imaging effects, including chromakey, to electronically transport Cunningham’s studio performance into a series of outdoor landscapes. The audio track includes the voices of John Cage and Jasper Johns. 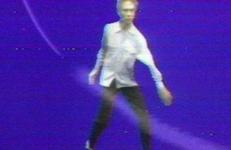 Mike Builds a Shelter is a performance comedy with apocalyptic overtones, a narrative extension of Smith's installation Government Approved Home Fallout Shelter/Snack Bar. In this darkly humorous morality play, Smith contrasts Mike's rural adventures in a pastoral landscape with his home fallout shelter. Throughout, the dual narratives are intercut with episodes of Mike's Show on cable, in which Mike's banal domestic activities are eagerly if passively received by living-room TV viewers. 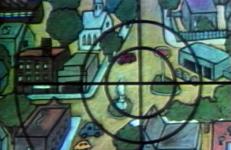 In Mondo Toronto, Glennda travels to Toronto to visit Liza LaBruce (Bruce LaBruce). Liza gives Glennda a tour of the city's public parks, with specific reference to their role in gay culture. Following this, Glennda attends a party that LaBruce is hosting and interviews partygoers, including Scott Thompson from The Kids in the Hall and Amy Nitrate.

An episode from a Lebanese TV series entitled "Image + Sound."  Each episode in this groundbreaking series is based on paralleling TV news images alongside staged events.  Mourning Images was shot at Studio Bayroumi in the historic district of Saida, Lebanon. 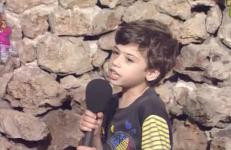 In New Report, Wynne Greenwood and K8 Hardy are reporters at WKRH - the feminist news station that is "pregnant with information." As Henry Irigaray (Hardy) and Henry Stein-Acker-Hill (Greenwood), these two lesbian feminist artists stage reports on and with their friends, their social herstories, their nerves, and their bodies. It is urgently broadcast live to the newsroom and out to their studio audience.

In New Report, Wynne Greenwood and K8 Hardy are reporters at WKRH - the feminist news station that is "pregnant with information." As Henry Irigaray (Hardy) and Henry Stein-Acker-Hill (Greenwood), these two lesbian feminist artists stage reports on and with their friends, their social herstories, their nerves, and their bodies. It is urgently broadcast live to the newsroom and out to their studio audience.

Glenn Belverio
A Night at Marie's Crisis with Mark Allen, 1995

In this episode of Glennda and Friends, Glennda Orgasm and Mark Allen drink at Marie's Crisis Café, a piano bar in Manhattan. They interview other bar patrons and discuss topics including politics, Judy Garland, and the idea of mid-life crisis.

An episode of Glennda and Friends, hosted by Glennda Orgasm and Mark Allen. 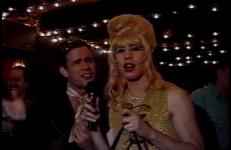 Antonio Muntadas
On Subjectivity (About TV), 1978

On Subjectivity examines how information is disseminated, how people read, screen, and interpret images; how mechanisms function and articulate information. How are we affected by what the networks choose to give us, and how do we choose to interpret what we see? Considering diverse interpretations influenced by cultural difference, levels of perception, and the manipulation of the image, Muntadas provokes inquiry into the potential of television and consideration of the intentional and unintentional influence of television on our daily lives. 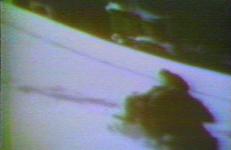 Glenn Belverio
On the Campaign Trail with Joan Jett Blakk, 1992

In this episode of The Brenda and Glennda Show, Glennda meets up with guest co-host Joan Jett Blakk to discuss Blakk’s 1992 presidential run. The pair interview people on the street outside of the 1992 Democratic Convention. They discuss topics including the police state, weaknesses of the two-party political system, feminism, and political elitism.

In One Man Ladies, Glennda Orgasm is joined by Vaginal Davis as they meet women on the streets of New York City to discuss Laura Schlessinger's book Ten Stupid Things Women Do to Mess Up Their Lives. The pair humorously explore the best ways modern women can find and secure a husband.

An episode of Glennda and Friends, hosted by Glennda Orgasm and Vaginal Davis.

Presidential candidates are sold like commercial products and naturally television is the ideal medium. Political Advertisement depicts the evolution of political ads over the last 44 years, beginning with Eisenhower in 1952 (which was an unqualified success), and continuing up to the most recent ad campaigns for Ross Perot, Bob Dole, and Bill Clinton in 1996. 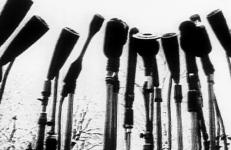