Forest Mind is a video work that emerges from the artist’s longstanding interest in the human interaction with the natural world. In a series of recent art projects, she has shed light on the cosmology of Indigenous communities and their political struggle to keep their forests alive. In continuation to Forest Law (2014) which covered several Nature Rights cases in Amazonian territories in Ecuador, Forest Mind tackles the underlying concepts that distinguish the Indigenous knowledge systems from that of modern science, gaging the limits of rationalism which has dominated Western thinking for the last 200 years. Located in the tropical forests of southern Colombia and told from a personal perspective, the narrative takes up diverse strands of research from the intelligence of plants to the importance of the territory as a sentient and cognitive entity. Drawing on scientific as well as shamanic perspectives of engaging with the world, the project takes an ecocentric worldview.

Indigenous knowledge has a strong presence in Forest Mind, as the artist has spent several years collaborating with the Indigenous Inga community in Colombia. To bring their shamanic science of Ayahuasca in dialog with the Western-scientific perspective, the project explores new methodologies.

With modern science adopting a predominantly mechanistic take on the living world, and Indigenous peoples experiencing an animate natural territory imbued with a spiritual dimension, these distinct cosmologies were considered vastly incompatible for the longest time. Colombia has seen the simultaneous emergence of colonial conquest and natural science which became entangled from the very beginning. Forest Mind locates itself at the convergence of these colonial scientific histories. The project proposes a contemporary reading of Indigenous knowledges and brings them into dialogue with modern science, as for instance plant neurobiology or quantum biology. The video navigates and mediates these mental landscapes and grounds them in the southern forests of Colombia where both histories have been intertwined for hundreds of years.

The shamans insist on the existence of animate essences which are common to all life forms. This principle has been confirmed in the 1950’s by the discoveries of DNA as the molecule of life that all species share in common. DNA technology is the Western approach to understanding the all-encompassing interconnection of life.

In cooperation with the ETH New Material Lab in Zurich, the artist made an experiment by taking a sound recording, a still image and an actual biopsy of a living tree seed in the endangered tropical forest and convert them into one single DNA code. Hence the project collapses the distinction between life and its forms of audiovisual representations. Shamanic, scientific, and artistic practices have each found their own way to access the genetic message. 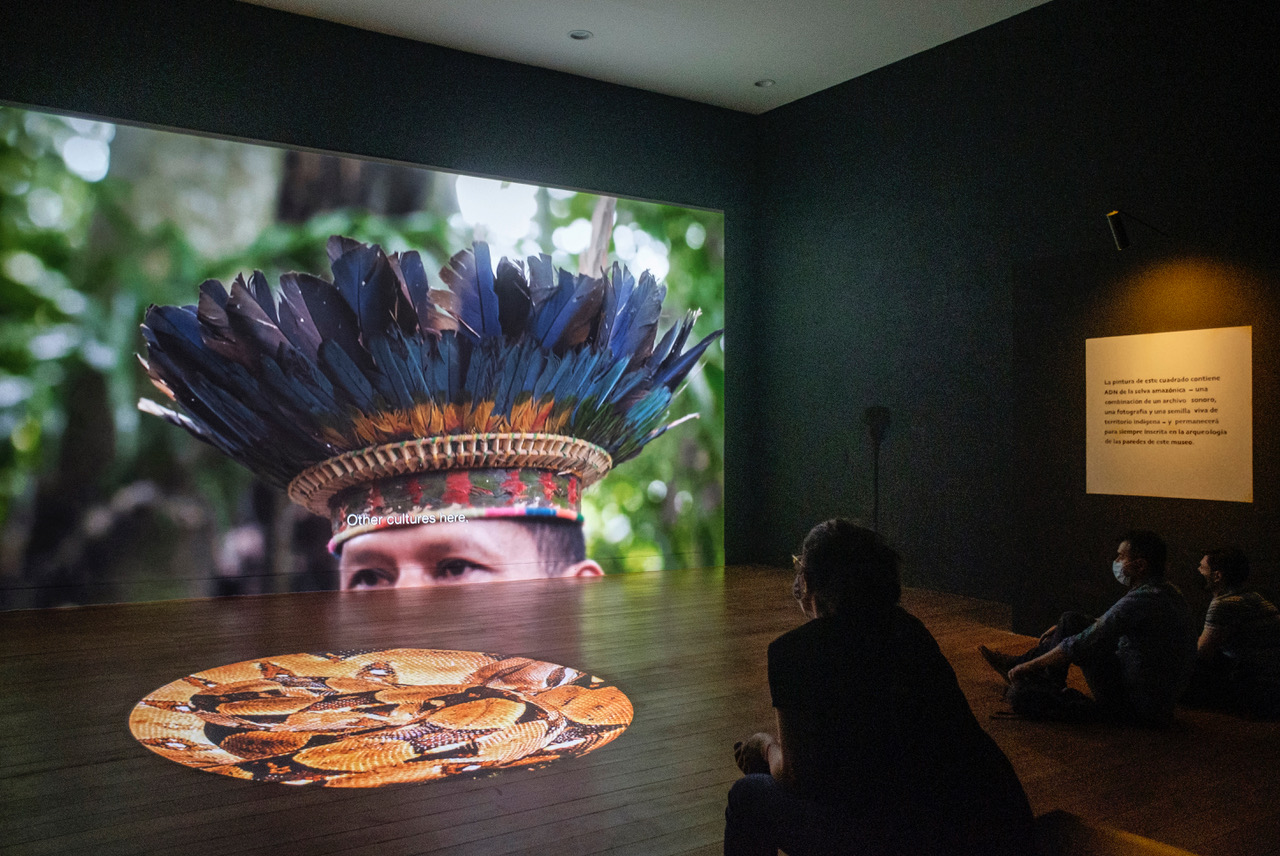