With a reputation in both academic and media circles for producing "stand-up theory", Joan Braderman, award-winning video artist and writer, started making videos in the 1970s, working with political organizations and on numerous documentaries — from the streets of Philadelphia and the South Bronx (for a Bicentennial Without Colonies (1977) and Peoples’ Convention, Convencion Del Pueblo (1980), to Nicaragua. Waiting for the Invasion, a collaboration with Dee Dee Halleck, Skip Blumberg, Shu Lea Cheang et al, won Best Documentary Award at the Global Village Documentary Festival in NYC in 1984 and was broadcast on Public TV. Madre; Tell Them for Us (1985), made with Jane Lurie, was shown in the U.S. House of Representatives. With a group of other women artists and critics, she co-founded the influential Heresies, A Feminist Publication on Art and Politics.

On a dare from Paper Tiger TV producers, she designed a show with filmmaker and digital theorist, Manuel De Landa, parodying / slandering the National Enquirer, which resulted in the infamous, Natalie Didn’t Drown (1983). Inventing a style that has been dubbed, "stand-up theory", she delivered a one-woman, lunatic performance, at once embodying and sharply analyzing the schizophrenia of U.S. culture.  Few have matched the technique, bravery and humor of her high camp 1986 piece, Joan Does Dynasty, in which she invades the iconic prime-time soap opera of the greedy Reagan '80s. Braderman works between the cracks of pleasure and power. Joan Does Dynasty showed at the Whitney Biennial, the Edinburgh Film Festival, MoMA, the AFI National Video Festival, and many other venues, and is said by critics to be the, "most widely distributed feminist video ever made."

Braderman has continued to work for media democracy, promoting independent film and video in her art making and teaching. She taught at Hampshire College, Massachusetts, as Professor of Video, Film and Media Studies. Recently she has been focusing on issues such as U.S. culture’s fascination with glamour and celebrity — which she unabashedly shares. Thirty Second Spot Reconsidered (1988) won the Critics’ Choice Award in the New England Film and Video Festival and was included in Image World at the Whitney.  No More Nice Girls (1989) won First Prize in the Daniel Wadsworth Video Festival, premiered at the Collective for Living Cinema and was included in the Decade Show at the Studio Museum of Harlem. Joan Sees Stars (1993) premiered at Video Visions, part of the New York Film Festival, and at the National Film Theater in the UK, won a Citation from the Black Maria Film Festival, and Best Dramatic Criticism award at the Atlanta Film Festival, among other honors. Video Bites (1998) was selected for inclusion in the Pandæmonium Festival of Moving Images in London. As Braderman continued to plant her own body irreverently into the space of movies and TV, the De Cordova Museum in Massachusetts gave her a retrospective in 1995. Her work is held in permanent collections in such places as the Stedelijk Museum, Amsterdam, the Museum of Modern Art, NYC, the Institute of Contemporary Art, London and the Georges Pompidou Center, Paris.  She recently returned from a Fulbright Fellowship in Porto, Portugal.

With her unique performative style, combining black humor, spatial irony and collage, she continues to take over the spaces she "appropriates" from the media corporations. Braderman brilliantly embodies for viewers the ways that popular culture makes us and breaks us; torments and heals us; lies and enrages us.  The spaces of her work look like high chroma pastiches of images of a star-struck viewer fighting her way through the era of AIDS and backlash, woven with moments so familiar in the worlds of globalized pop culture that a kind of eerie, vernacular "other world" is created. Her work is simultaneously highly articulate, politically compelling, and scandalously funny. 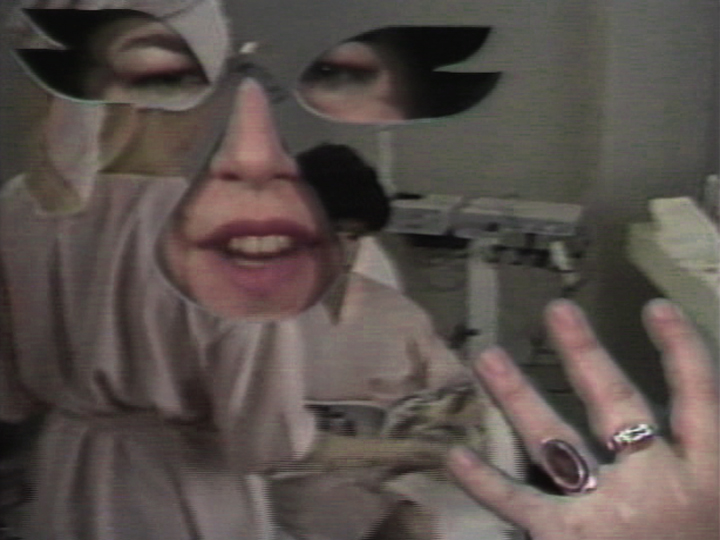 Press
Reframing Pop Cultural Images of Women Through a Queer and Feminist Lens
Essay
Feminism and Video: A View from the Village