Since the early 1980s, Eduardo Kac has pioneered new art forms to create poetry and art that expand the limits of locality, light, language, and life. He has integrated many disciplines to present an imaginative view of art's relevance to the contemporary world, a view that has firm roots in the artist's background in philosophy and literature. Widely recognized for his innovative online work before the advent of the Web, particularly his telepresence art, Kac developed new poetic forms such as holopoetry, digital poetry and aromapoetry. His work has progressively focused on the relationships among and between humans, machines, animals, and other life forms. Kac‘s work explores but goes beyond human language and culture to encompass communication between all living organisms. Visually and intellectually stimulating, his art embodies a visionary combination of robotics, biotechnology, and networking. Kac uses communication processes, biological life, and digital networks to create works that explore fundamental human experiences such as the fluidity of language, dialogical interaction, and awareness of our relative place in the larger community of life. 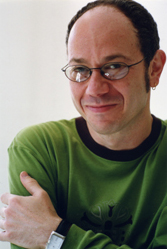 Press
A Space Odyssey: Making Art Up There