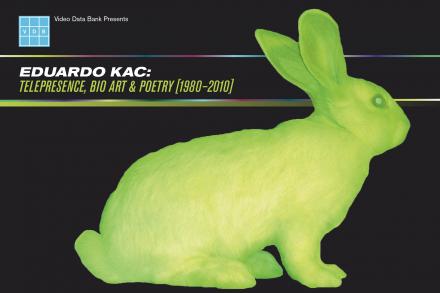 Video Data Bank is proud to present the pioneering work of Bio Artist Eduardo Kac. This three-disc box set features art works that expand the limits of locality, light, and language. Included is a 119-page monograph containing seven essays that investigate and elaborate on how Kac uses communication processes, biological life, and digital networks to create works that explore fundamental human experiences such as the fluidity of language, dialogical interaction, and awareness of our relative place in the larger community of life.

"The impact of Kac’s transgenic art — and in particular his daring creation of new animals — on the contemporary art scene has been considerable. Looking at his works as a whole, one can see the artist’s audacious inventions and achievements as a decisive contribution to an expanded definition of art in the 21st Century. Kac’s works introduce a vital meaning into what has been known as the creative process, while also investing the artist-inventor with an original social and ethical responsibility."

“No one medium can hold Eduardo Kac. His work ranges from body-based performance art and graffiti to the use of fax machines, slow-scan, digital poetry, telerobotics, the web, and biotechnology. In Kac’s art what mattersis not the storage medium but the concepts which, in his case, can only be expressed through the use of new technologies.”