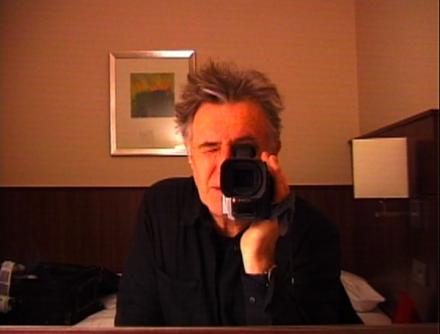 Hotel Diaries is an ongoing series of video recordings made in hotel rooms, all of which relate personal experiences to contemporary world events. Works in the series currently include Frozen War (Ireland, 2001), Museum Piece (Germany, 2004), Throwing Stones (Switzerland, 2004), B & B (England, 2005), Pyramids/Skunk (The Netherlands, 2006/7), Dirty Pictures (Palestine, 2007) and Six Years Later (Ireland, 2008). They can be shown individually (apart from Six Years Later) or as a chronological group.

"...These deceptively unassuming works consist of single takes from the point of view of Smith's camcorder as he explores the nocturnal spaces of hotels he is staying in and delivers monologues on his thoughts and observations. At once politically concerned and very funny, these brilliantly structured ramblings connect the observations of his surroundings with the horror of world events in consistently surprising ways."

Made in Ireland, October 8th, 2001.A disorientating experience while attempting to watch the TV news in an Irish hotel room triggers a spontaneous response to the bombing of Afghanistan. Frozen War…

Made in Germany, October 14th, 2004While the Iraq war continues, a day's sightseeing and the features of a German hotel provoke a stream of thoughts about events large and small.Museum Piece is the…

As the camera looks out through a barred window and the clock strikes four in a Swiss city, the death of Yasser Arafat provides the starting point for a journey back in time. Throwing Stones is the…

UK, November 26th 2005The perception of an Anglo-American hotel room is coloured by new revelations about 'The War on Terror' and 'The Special Relationship' that exists between Britain and the USA.…

Netherlands, January 29th 2006/January 29th 2007Hamas have just won the Palestinian elections and a chocolate bar in a Rotterdam hotel room eventually reminds the filmmaker that there are more…

Palestine, April 15th-16th 2007Moving from one hotel in Bethlehem to another in East Jerusalem, the filmmaker encounters a series of problems involving a ceiling, a video camera and the Israeli…

Ireland, October 20th 2007The filmmaker returns to the city where he made the first video in the series and looks back at the events of the past six years.Six Years Later is the eighth episode in the…