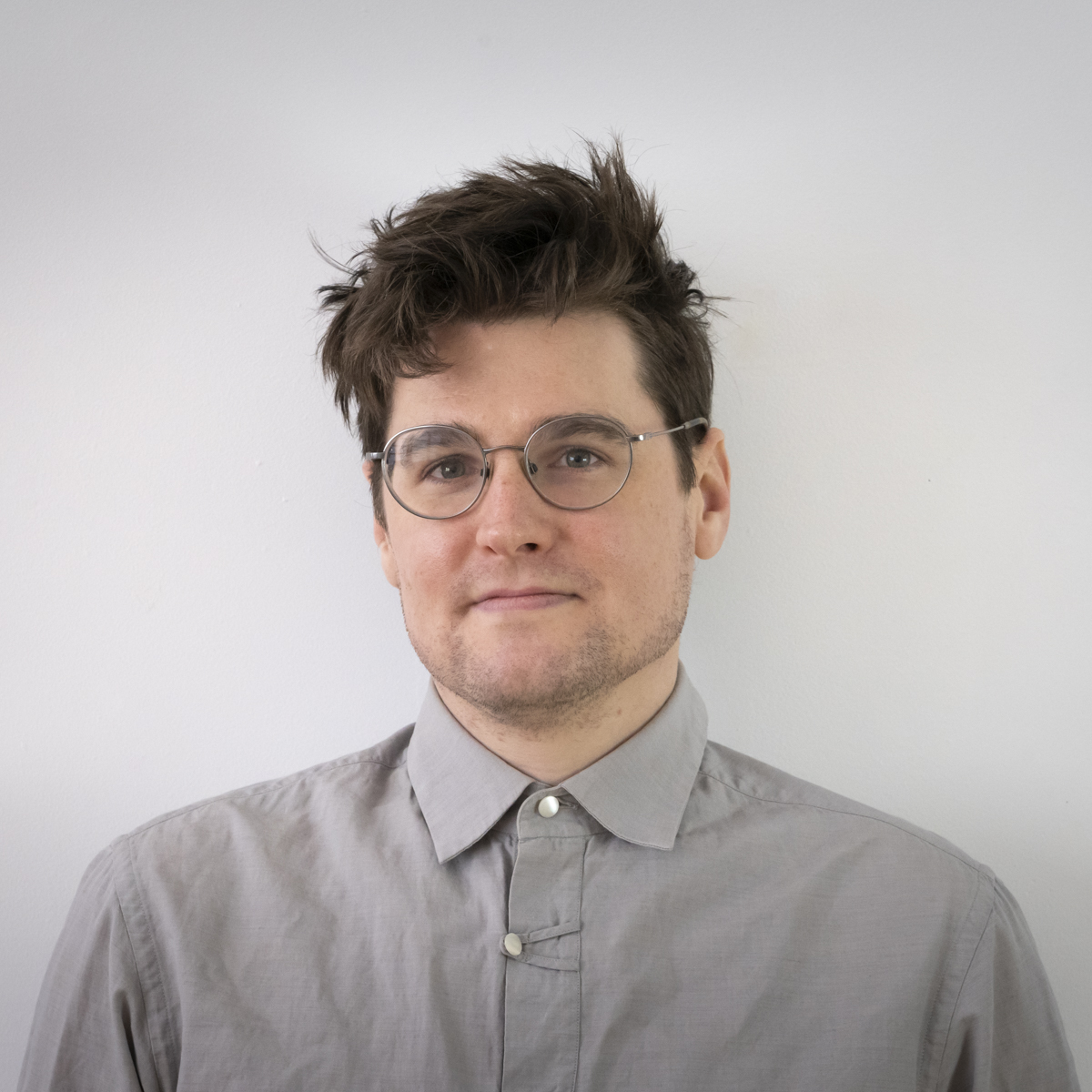 Carl Elsaesser (1988, USA) graduated from Hampshire College and the University of Iowa. He lives and works between midcoast and interior Maine and Brooklyn, NY. He has made several short films which have screened at festivals in New York, Michigan, Amsterdam, Korea and elsewhere. In his practice, Elsaesser mixes genres and materials to produce work that “critically investigates the overarching presence of the historical without losing sight of individual experiences of human connection.”

I grew up in a small town on the coast of Maine on an old blueberry farm that was converted into housing lots. It was a very pastoral childhood with a lot of nature all around, from the blueberry field in front of the house to the gully behind our house that ran to the bay down the road. I grew up learning to fly fish, ice fish, hunt, camp and hike. After that I skipped around most of the country, worked at a salmon processing plant in Naknek Alaska, lived in a warehouse in Oakland, Chicago, Iowa, Minnesota, downeast Maine and now I’m in Brooklyn!

I always loved films growing up. We had this amazing dvd store in town called Bart and Greg’s DVD explosion (before that I think it was Matt and Dave’s which always makes me laugh a little). They had this incredible selection of films and great eclectically curated sections. At Matt and Dave’s they used to have this porn section behind a curtain that they got rid of for Bart and Greg’s so instead there was this folder that you’d have to look at publicly in front of other customers, so wonderful! But anyway, I used to watch movies from their collection multiple nights a week and started to dream. Sadly, like every other video store, Bart and Greg’s closed several years back. I think Bart passed on most of their massive collection to Bowdoin college. I wonder if the cases still bare the labels from the store…

Yes! I went to Hampshire College and worked with Abraham Ravett and Baba Hillman who were the first to expose me to experimental film. I hated everything they showed me; I remember the first time Abraham showed us Window Water Baby Moving and thinking to myself, ‘what is this piece of garbage?’. It wasn’t until graduating and having worked on a couple failed narrative films that I decided to return to a kind of ground zero with my practice. If I couldn’t be my undergrad repressed straightboi hero, Terrence Malick, then maybe I could be me and make a work that was brutally, simply, erratically mine. And lo and behold, ten years later, I'm still making work inspired by and in a legacy of those very films that Baba and Abraham first showed me, ha!

I went to grad school at the University of Iowa and at the time there was this turn over in faculty and only one other student entered that year with me, so she (Emily Drummer) and I as well as the faculty kind of had free terrain for the first year or so to imagine what was possible within the realm of the institution. So who could we get to come screen work, how could we push each other’s work and practice and ambitiously imagine projects. It was a total dream. I had several brilliant mentors there: Mike Gibisser, Julie Murray, Jason Livingston and Chris Harris.

It’s been a long struggle with personally high expectations of myself, lol. I’ve slowly over the last many years been developing a more ritualistic practice to my work where I’ve committed to working on projects nearly every day for just an hour. I set an alarm and hone in. Sometimes I go longer, sometimes I get nothing done in that hour, but it’s more about showing up without the impossible expectation of working for many hours / getting a ton of work done etc. I like to be V. gentle with my work, so so gentle in the effort and exertion. I’m very prone to overworking my projects.

I do not make a living through creating art, and I’m not sure it’s a good idea either- at least for me. I like being a working artist. There are a lot of hours in the day outside of that one hour of practice lol. I have a freelance editing business in the city so there’s a lot of flexibility with work and practice which I really enjoy. And the income from the work is usually enough to fund my projects which feels deeply liberating to me.

Maintenance, meditation, texting with friends, relationships of most any kind, loneliness, the community of media practitioners making work in their spare time, reading, watching, listening, boredom, nature always nature, family, my dream of buying a small house in rural Maine, cooking, running, all the faded images of humanoids that designate which side of the road to walk on in Prospect park (especially the ones whose heads are entirely rubbed off!), hiking, traveling, all very simple stuff!

Recently, as in the last couple years I’ve been obsessed with Chantal Akerman and Douglas Sirk who I think are the perfect duo. I’m working on a project now that involves Robert Zemeckis’s film Contact, so a lot of that and other late 90’s romantic with a capital R Hollywood films. Within the more experimental realm of work, I’ve always been inspired by Dani ReStack’s practice, Mary Helena Clark’s brilliant films, Anaïs Duplan’s practice, work by early video artists like Hermine Freed, Barbara Aronofsky Latham, Joon Soo Ha, Joan Jonas, Charlemagne Palestine. I don’t know, I have many tabs open on my web browser!

I was up in Maine shooting a couple coastal landscape paintings at the Bates College Museum of Art. The exhibition was titled, An Adventurous Spirit: The Jane Costello Wellehan Collection.

There was the time someone in an audience at Ann Arbor started singing the music in one of my films out loud in the silence between films; that tickled me. There was a screening in Milwaukee where someone concernedly asked and wanted to know in detail how I made money which I sincerely loved. There was a screening in Massachusetts where only two people showed up. Showing work at Bryant-Lake Bowl in Minneapolis with Cellular Cinema is always wonderful. The premier at NYFF this year was so special cause it was the first time I had screened work for a IRL public audience since before the pandemic; you just can’t beat screening work in a theater full of people. Oof. Sometimes an audience just clicks with the work in ways that really surprises or lingers with me. It’s such an isolating practice and it’s truly wild when people connect with the work.

I’m working on a feature film about faith, technology and the coastline of Maine, but I’m not going to admit how long I’ve been working on this film cause it’s an embarrassing number of years.

I try not to intentionally start projects. I like to keep it as wide as humanly possible. I feel like if I know a project before I start then the project is already dead. So, for the last film I made (Home When You Return) I started out by making a film I thought was going to be about lumps, mounds and depression, and it turned into a love letter to two strong-willed, high-powered women in my life! You gotta be tricky, sneak your way in and keep lying to yourself! I make by building a massive archive for a project, usually with its own hard drive, and from there I figure out how to relate to this collection of sounds, images, ideas, words, concepts, gestures etc. Ending is much harder; it’s so easy for me to over edit a film, so usually a film ends about 50 times before I’m satisfied with whatever configuration I’ve landed on.

I just moved to Brooklyn and mostly my viewing habits have been designed by the city. Did you know there’s so much to see here? Ha! It’s truly wild. Recent viewings have included Michael Snow’s retrospective at Anthology, screenings from Art of the Real, and a truly memorable screening of James Benning’s Ten Skies. I’m rereading Anaïs Duplan’s Blackspace: On the Poetics of an Afrofuture, and my constant go to: self-help books.