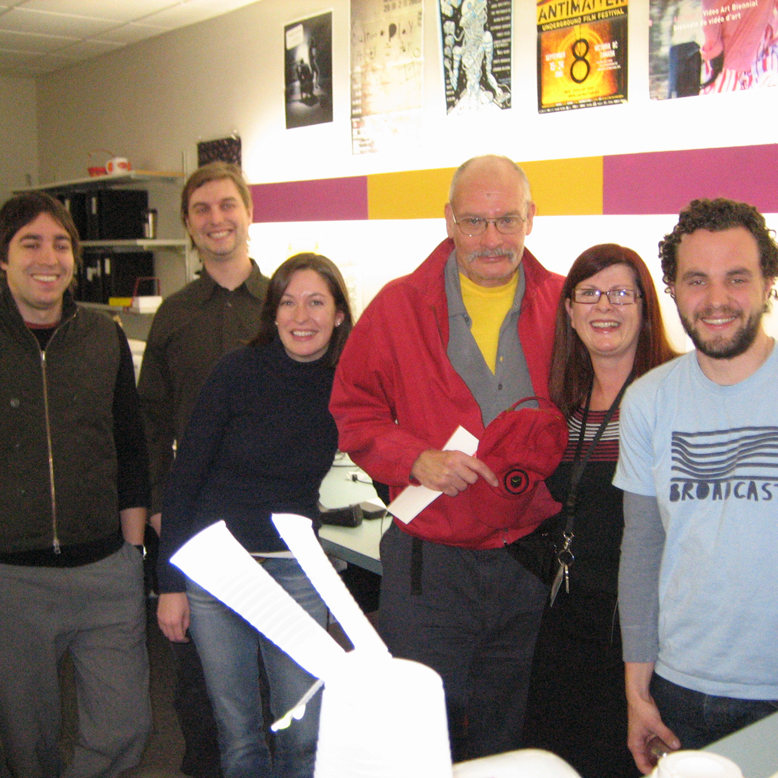 All of us at the Video Data Bank are saddened at the passing of our dear friend George Kuchar.

George transitioned from film to video in 1985, and VDB has been distributing his work with the form almost as long. Including the three titles he sent us this year, VDB now distributes 275 of his videos. Receiving a new package from George was always a treat for us: excitement would start with the titles… Lumps of Joy, Mecca of the Frigid, Sins of Bunny Luv… Then came the "blurbs", his handwritten tape descriptions, peppered with alliteration and double entendres. Even before we had seen the contents, we were hooked. Every January we would wait for George's holiday video to arrive, eagerly anticipating what would invariably be the first acquisition of the year. In the spring there might be a Weather Diary chronicling the Oklahoma storm season; in summer, we'd receive the class picture, made with his students at the San Francisco Art Institute.

Recognizing that audiences wanted to see his work, but didn't know where to start, we collaborated with George to make a DVD box set, published in 2006. The process was immensely pleasurable, with George characteristically trusting that we would do a good job while proving incredibly helpful whenever we needed advice. I can truly say that this project united the whole staff team as we worked to bring it to fruition. Curated by artist and writer Steve Reinke, and with essays by him and cultural theorist Gene Youngblood, the box set features examples from across George's oeuvre: the Weather Diaries, class pictures, summer visits to friends in New York and Cape Cod, winter holiday festivities, festival visits…. George is funny, kind, teasing, sarcastic, yearning and melancholy. And always, always hungry.

That same year VDB celebrated it's 30th Anniversary, and it seemed natural we would ask George to Chicago to celebrate with us. Along with his friend and sometimes collaborator, artist Anne McGuire, and Youngblood, George helped make our celebrations truly memorable, interacting with audiences, SAIC students and faculty, and the city at large.

Most recently we have been thrilled as George's huge talents have been recognized by the art world establishment through the Berlin Bienniale, New York's Volta, and other major exhibitions.

George made everybody he worked with feel special. He also turned many of us into movie stars, making our secret dreams come true. His pictures represent the world of the flesh, where real people are transformed into gods and goddesses, where tenderness and loneliness and glamour exist alongside the humorous and the flatulent. To interact with George on a day-to-day basis and to represent his work was a true pleasure: in addition to his artistic talents, he was incredibly organized, modest, grateful, and gossipy. He was the ultimate dinner companion.

We send our deepest condolences to his twin brother Mike, and to his friends and family. We have lost a dear and unique artist, and a lovely man. We miss you George.

For more information on George Kuchar and his work click here...