Glenn Belverio
A Case for the Closet, 1995

Anthony Ramos' astute deconstruction of television news focuses on his part in the media coverage of President Jimmy Carter's 1977 declaration of amnesty for Vietnam draft evaders. Ramos, who had served an 18-month prison sentence for draft evasion, was interviewed by news reporter Gabe Pressman, whose film crew meets Ramos' video crew in a confrontation between technologies and sensibilities. At the time, some broadcast television news crews still used 16mm film, although the expensive transition to ENG (electronic news gathering) systems had begun in 1974. 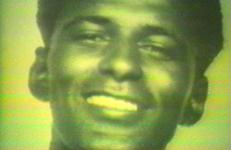 "This video reflects my interest in examining cultural institutions. In The Amarillo News Tapes, we were interested in observing and dissecting what makes news in a small, Midwestern television market. The video shows the three of us in our respective roles as anchor, weatherman, and sportscaster, interacting with the real Pro News Team on the set. 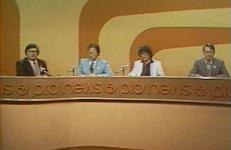 Glenn Belverio
An Evening with Kembra, 1990

In the video An Evening with Kembra, Glennda and Brenda attend one of Kembra Pfahler's dinner shows on New York City's Lower East Side. At her show, she performs cabaret versions of songs from her band The Volumptuous Horror of Karen Black. After the show, the group discusses the relationship of her work to queer culture. Interspersed throughout the video are two short clips: a skit entitled Drag Queen Starter Kit, and a call to boycott a bakery due to its discriminatory behavior. 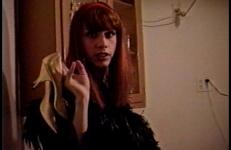 In Bad Grrrls, Glennda and Fonda LaBruce attend a Riot Grrrl conference on New York’s Lower East Side. At the conference, they conduct interviews with punk women, performers and artists, including Penny Arcade and Sadie Benning. In doing so, Glennda and Fonda navigate a range of perspectives on feminism, punk, and underground activism. Furthermore, they engage with questions of drag’s relationship with feminism, and how one would reconcile the problems of punk with Riot Grrrl’s desire for women’s liberation. 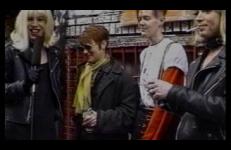 Glenn Belverio is an independent filmmaker and drag artist who lives and works in New York City. In 1990, he began producing and co-hosting the popular Manhattan Cable series The Brenda and Glennda Show, a talk show that mixed activism with comedy as it took drag out of the clubs and onto the street. In 1993, the show became Glennda and Friends, a post-queer task show featuring provocative co-starts such as gay pornographer Bruce LaBruce and guerrilla scholar Camille Paglia. 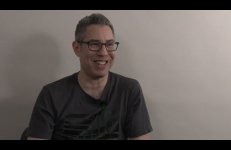 Showcasing local documentaries made on 1/2" equipment, Changing Channels was a weekly alternative video magazine produced by University Community Video (UCV) and aired on public television station KCTA, Minneapolis. In The Business of Television News, which aired as part of the Changing Channels series, several area television news operations were asked to examine their objectives and their markets. 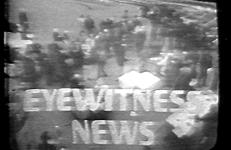 Covid Messages is a video in six parts, based around broadcasts of Prime Minister Boris Johnson’s COVID-19 press conferences. The work focusses on the British government’s attempts to eliminate the virus through the use of magic spells and rituals. While the pandemic spreads and the death toll rises, the Prime Minister makes repeated errors of judgement. Exasperated by his many mistakes, the spirits of the dead rise up and intervene. 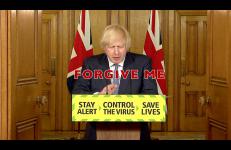 In this video, Brenda Sexual, Glennda Orgasm, and friends act out a drag queen murder mystery that takes place on their talk show. Later, they attend the Queer Fashion Army Invasion, a sit in of openly queer public fashion performance outside the Fashion Institute of Technology in Manhattan. Then, the pair arrives at a video store to discuss queer undertones of Hollywood films, like Grease, Rocky II, and Yentil.

In this episode of The Brenda and Glennda Show, Brenda and Glennda comically debate changing the name of their show to Drag Queens for Jesus, in order to convert all the secular homosexuals to Christianity. They discuss topics like abortion and censorship from a drag queen perspective, exploring the hypocrisy and inherent bias of Christian ideals. Later, Brenda gets her nipple pierced in homage to Sandy Daley's Robert Having His Nipple Pierced (1971).

Equal Rights for Unborn Drag Queens is a satirical short video in which Brenda and Glennda critique anti-abortion politics, homophobia, and religious fanaticism in the media. Interspersed between clips of right-wing news broadcasts is footage of Brenda having her nipple pierced, in an homage to Sandy Daley's Robert Having His Nipple Pierced (1971).

In Fagtasia Solstice, Brenda and Glennda attend a Radical Faerie event in New York City to commemorate the Summer Solstice. Through interviews with Faeries and footage of their walk across the Brooklyn Bridge, the group proposes to reclaim the city as a safe space for queer people, and discuss reorienting queer consciousness toward spirituality.

An episode of The Brenda and Glennda Show, hosted by Brenda Sexual and Glennda Orgasm. Featuring the Radical Faeries. Thanks to Julie Clark and Dana Nasrallah.

In 1975, the Feminist Studio Workshop (I was a member) at the Woman’s Building in LA, the Women’s Interart Center in New York City, and another feminist organization in Washington DC, attempted to set up a video exchange among feminist art organizations. This was the first videoletter on our end. I don’t know if another one was ever made.

The videoletter is a tour of the Woman’s Building. Pam McDonald, with microphone in hand, another workshop member, and myself, served as guides through the building. It was shot with a black and white video portopack. 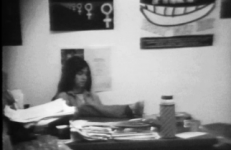 Gaijin = A non-Japanese person. In 1984 I celebrated my eighth birthday on my mother's island. My Uncle Pat set a VHS camcorder up on a tripod and left it running to record the festivities. A year or two later, I accidentally recorded a snippet of the sitcom Mr. Belvedere over some of the footage. 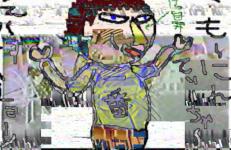 “To master the one-minute time span requires considerable discipline, and few pieces, if any, had been shaped as genuine miniatures—most having the appearance of being extracts from larger works. The notable exception was John Smith’s Gargantuan, which was not only the right length for the idea, but actually incorporated a triple pun on the word ‘minute.’”

"A wonderfully witty example of how to conduct pillow talk with a small amphibian." 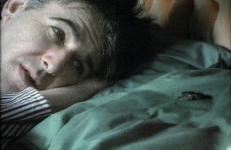 Glenn Belverio
Gender Cruise on the Circle Line - Part One, 1991

In Glennda and Bruce Do Times Square, Glennda is taken on a night tour of Times Square by author Bruce Benderson. They observe the dynamic between forms of culture that would typically be identified as “underclass” in “suburbanite” culture within the economic and spatial landscape of New York City. Glennda and Bruce visit the apartment of performer Consuela Cosmetic, who was prolific within New York’s ball scene. She maps out the ways in which she believes gender can be expressed, and discusses the implications of ‘passing’.

In this video, Glennda Orgasm and social critic Camille Paglia walk the streets of downtown Manhattan and discuss the status of mainstream feminism in the early 1990s. They visit the Stonewall Inn, Washington Square Park, and a gay bookstore, and confront a group of anti-pornography protesters.

An episode of Glennda and Friends, hosted by Glennda Orgasm and Camille Paglia. Featuring The Centaurians, Brian Roach, and Rennard Snowden.

In this video, Glennda is joined by social critic and feminist scholar Camille Paglia in New York's fashion district. The pair visit designers studios to discuss their respective styles and creative processes. Additionally, Glennda and Camille explore fashion's relationship to gender and feminism, ultimately recreating an iconic scene from Breakfast at Tiffany's.

An episode of Glennda and Friends, hosted by Glennda Orgasm and Camille Paglia.

In this video, Glennda and sex activist Chris Teen attend the opening of Dress Codes at Boston's Institute of Contemporary Art. They interview museum staff, artists, and other attendees to explore how an exhibition centered upon gender nonconformity will be received by both queer communities and the general public. Glennda and Chris Teen discuss the importance of visibility for marginalized communities, and tap into gender discourses as they existed in the early 1990s.

In this video, Glennda Orgasm and Chris Teen travel to Washington, DC to attend a feminist art exhibition titled Walk the Goddess Walk at the District of Columbia Arts Center. The pair talk to the owner of the gallery, artists included in the show, and attendees, including Francy Caprino, Teena Cromwell, Andrew Melon, Camille Paglia, and Joseph Virgilio.

An episode of Glennda and Friends, hosted by Glennda Orgasm and Chris Teen.

In this video, Glennda and Judy LaBruce (Bruce LaBruce) visit the auction house Christie's East on New York's Upper East Side to view Judy Garland memorabilia that is being auctioned off. They attempt to rescue Garland's Oscar from those trying to profit from the auction.

An episode of Glennda and Friends, hosted by Glennda Orgasm and Judy LaBruce.