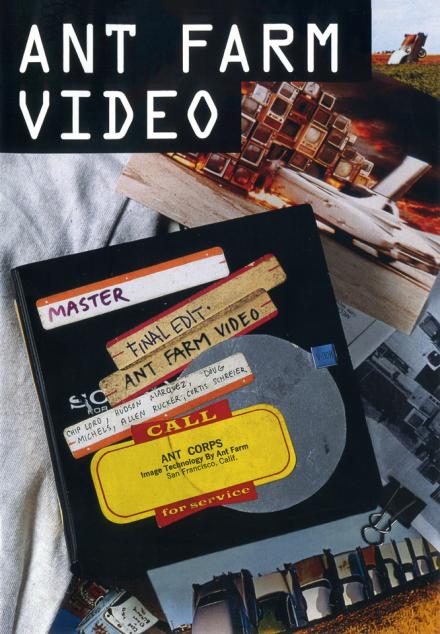 Notorious art and architecture group Ant Farm's unique vision arrives on DVD in this release showcasing some of the group's most popular works.

On the 20th anniversary of Cadillac Ranch, artist Chip Lord directed this documentary about the making of the 1974 video, and the history of the site since it was was entombed alongside Interstate 40, just west of Amarillo, Texas.  This documentary features statements by Texas tycoon Stanley Marsh and Ant Farm partners Lord, Hudson Marquez and Doug Michels. This follow-up, portraying the zany art world gesture and cultural significance of the Cadillac Ranch site was shot at the 20th Anniversary party held on June 21, 1994.

Curtis Schreier and Allan Rucker produced this how-to, table-top tape in a kitchen in San Francisco. Curtis demonstrates clever techniques for low-tech inflatable structures alongside geometry Lessons. Inflatables Illustrated is the video companion to Ant Farm’s Inflatocookbook, a how-to book of loose leaf pages in a hand made vinyl wrapper.

This real time document was shot during the Truckstop Tour of 1970 when Ant Farm-ers Doug Hurr, Hudson Marquez and Doug Michels crossed the bridge over Lake Pontchartrain, north of New Orleans, Louisiana. Billboards advertised this bridge as “The World’s Longest Bridge.”

In 1970, Ant Farm bought a Sony Portapak and initiated a series of improvisational tapes. Ant Farm’s Dirt Dishes is the edited version of these video scrapbook entries. Ant Farm’s kitchen featured a camera mounted on a Lazy Susan that turned communal meals into a performance

Ant Farm’s tour of Australia is documented by TV talk show appearances , including a performance by the “artist-kangaroo.” Ant Farm scored and conducted “CARmen: The Auto Opera” in front of the Sydney Opera House

In 1972 Ant Farm relocated to Angleton , Texas to design and build the “House of the Century” for Mailyn Oshman. The Time Capsule was commissioned by the Contemporary Arts Museum in Houston to inaugurate the opening of its new building. Contained in a refrigerator, it was scheduled to be opened in 1984. In actuality, the Time Capsule survived a flood and was put into storage. It was rediscovered by the Art Guys, who produced the opening event in 2000 with Ant Farm members Chip Lord, Doug Michels and Curtis Schreier.

Known as the best selling art post card of the late 1970s, Media Burn actually involved more than the impact image. A year in the making, with scores of volunteers, and a poignant performance by the “Artist-President,” Media Burn holds up as a classic of early video art. The Phantom Dream Car was built in Ant Farm’s studio and designed to crash the TV barrier. This dangerous performance is captured by early color half-inch video in documentary style, and “the image created here, shall never be forgotten.”

The version of Media Burn contained on this DVD program was remastered in 2003 and contains a 23 minute commentary track by members of Ant Farm.