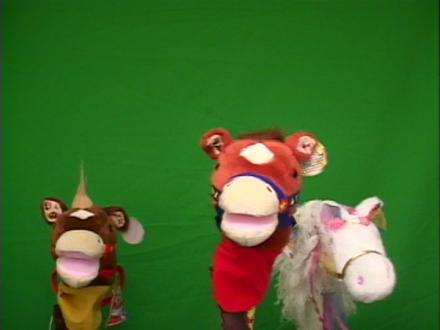 In the Post Pony Trilogy, Coonley serves as frustrated host to a series of flawed lessons on currency markets and current events. His heartbreak over a missing pony sidekick presents an obstacle to achieving his pedagogical goals. While coping with the lingering effects of a broken heart, Coonley struggles to maintain composure for his audience, who are instructed to interact with the videos. In the final segment, The Last Pony, ponies replace Coonley altogether and discover that their method of anarchic equine instruction is more interesting than the human’s method.

These videos were adapted from a series of live performance pieces presented in serial installments at “Movies with Live Soundtracks,” a quarterly DIY film/performance series based in Providence, RI. The three videos in the Post Pony Trilogy may be screened individually (independent of one another), or all together as a three-part trilogy.

A man explains global currency markets without the help of his formerly trusty rockin’ talkin’ pony, who is missing. Without the pony, the world is as disorientating as it is depressing. The…

Every Pony Plays the Fool

An audience-interactive game of Mad Libs, with support from a linguistically challenged newcomer. We replace various parts of speech in newspaper articles to create new, customized meanings.This…