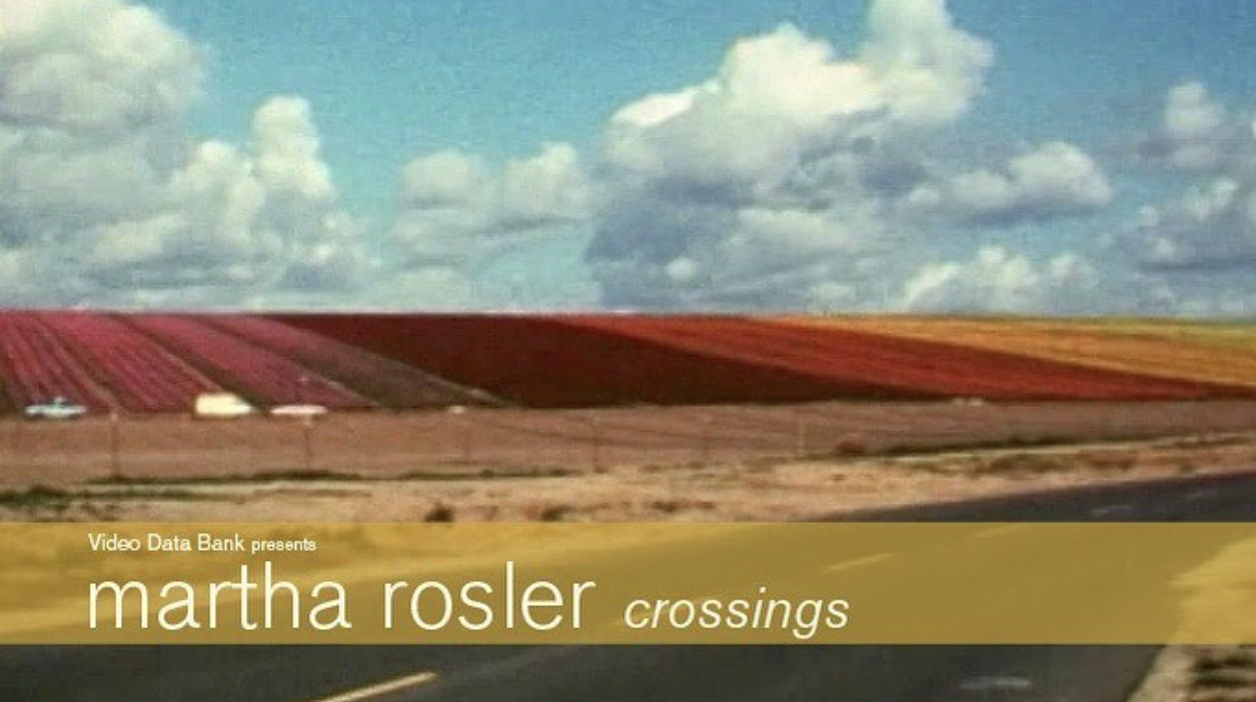 Video Data Bank is proud to present crossings, an extensive six disc collection of video works by Martha Rosler. Spanning five decades, this essential compilation presents Rosler’s unreservedly feminist, politically charged, historically vital, and ever-relevant Super 8 and video artworks. From pivotal early performances such as Semiotics of the Kitchen, to collaborations such as Born to Be Sold: Martha Rosler Reads the Strange Case of Baby $/M, and dissections of war and propaganda such as If It’s Too Bad to Be True, It Could Be DISINFORMATION — this anthology presents the work of one of video art’s most influential artists while simultaneously charting the cultural and technical developments of the video art medium since its inception. Accompanying the works is a newly published monograph detailing Rosler’s video works, with a wide-ranging essay by film and media scholar Nora Alter.

“The subject is the commonplace — I am trying to use video to question the mythical explanations of everyday life. We accept the clash of public and private as natural, yet their separation is historical. The antagonism of the two spheres, which have in fact developed in tandem, is an ideological fiction — a potent one. I want to explore the relationships between individual consciousness, family life, and culture under capitalism.” 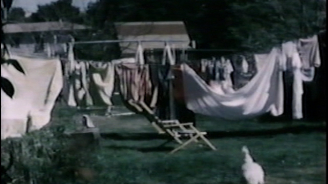 The first in a pair of silent Super 8 films centering on the backyard of a modest house in a coastal community of north San Diego County. The word “economy” itself was coined in relation to household… 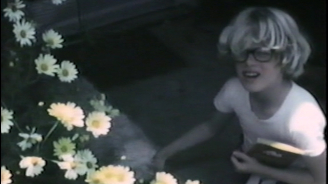 The second in a pair of silent Super 8 films centering on the backyard of a modest house in a coastal community of north San Diego County. The word “economy” itself was coined in relation to…

Semiotics of the Kitchen 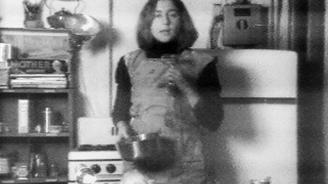 From A to Z in this mock cooking-show demonstration Rosler 'shows and tells' the ingredients of the housewife's day. She offers an inventory of tools that names and mimics the ordinary with movements…

Semiotics of the Kitchen: An Audition 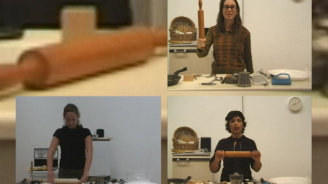 In 2003, Rosler announced an open call for a live re-staging of her 1975 video Semiotics of the Kitchen, to be held at the Whitechapel Gallery in London, for A Short History of Performance, Part II.… 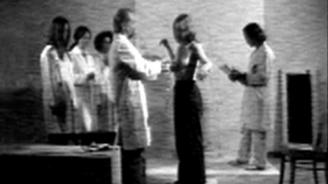 Taking aim at the social standardization enforced particularly on women's bodies, Rosler critiques the politics of "objective" or scientific evaluation that result in the depersonalization,… 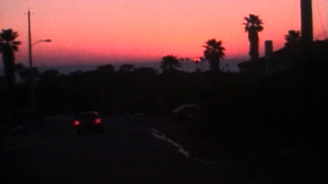 The low hills fronting the main California artery of Highway 5 exhibit a beautiful spectrum-like pattern, in stripes formed by the fields of flowers being grown there for commercial sale. The camera… 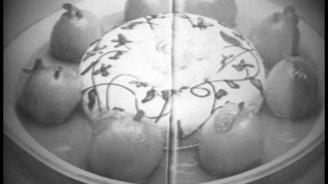 To the spare sounds of a Schönberg violin concerto, a silhouetted woman seated at a small tea table puts forth her reasons for wanting to become a gourmet. Photographs from glossy cookbooks and…

The East Is Red, The West Is Bending 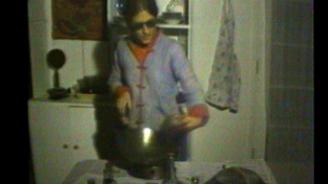 Rosler uses the format of a cooking demonstration (as in Semiotics of the Kitchen) to address cultural transaction--the meeting of Eastern and Western cultures. Reading directly from a West Bend…

Losing: A Conversation with the Parents 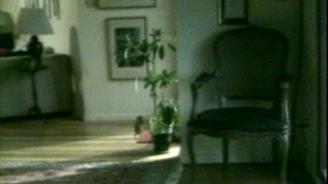 Treating the problem of anorexia nervosa from the parents' perspective, Rosler presents a mother and father speaking about the tragedy of their daughter's death as a result of dieting. The…

Domination and the Everyday

Rosler calls Domination and the Everyday, with its fragmented sounds, images, and crawling text, an artist-mother's This Is Your Life. Throughout this work, we hear—but do not see—a mother and small… 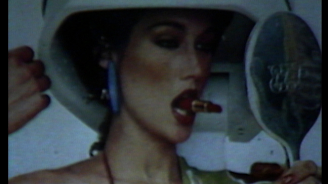 A live performance on a public-access cable program in New York deconstructing the messages in Vogue and its advertising. The work looks at the institutional slants of the magazine industry and the…

Martha Rosler tackles mainstream media's representation of the case of surrogate mother Mary Beth Whitehead. This video, made with the collective Paper Tiger Television, uncovers the class and gender…

A Simple Case for Torture, or How to Sleep at Night

Rosler identifies the totalitarian implications of an argument for torture, under certain circumstances, as it appears as a guest editorial in Newsweek magazine in 1982. Her critique is presented as…

Secrets from the Street: No Disclosure

Reading the billboards, the cars, the people, and the graffiti of the street as cultural signs, Rosler extracts the network of social power and domination that determines whose culture gets…

Museums will eat your lunch

In this silent video, still images of stores and residential buildings in New York City appear within a cutout template, based on the “giftbox heap” formed by the New Museum silhouette. As these…

How Do We Know What Home Looks Like? The Unité d’Habitation of Le Corbusier at Firminy, France

Shot in Firminy-Vert, a Le Corbusier Unité, or housing project, in south-central France, this work traces the building’s history through an engagement with the lives of its residents and traces of…

If it's too bad to be true, it could be DISINFORMATION 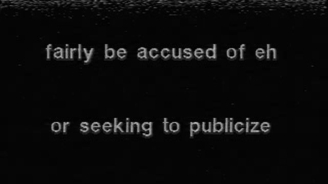 In a fusion of text and image, Rosler re-presents the NBC Nightly News and other broadcast reports to analyze their deceptive syntax and capture the confusion intentionally inserted into the news…

Chile on the Road to NAFTA, Accompanied by the National Police Band 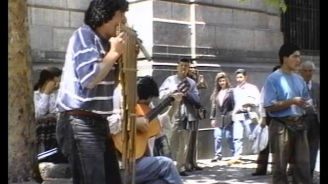 A bouncy music-video burlesque shot in and around Santiago, Chile, entwines reminders of U.S. corporate presence and of past political terror, with national and international musical strains. Chile,… 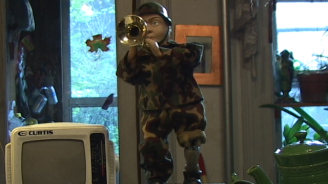 Because This Is Britain 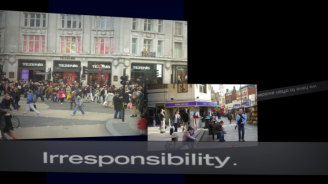 A visualization of phrases used by Prime Minister David Cameron during his Oxfordshire speech addressing the events of August 2011. Selected phrases emerge from the stream of his speech, punctuated…

Martha Rosler (b.1943) received her BA from Brooklyn College in 1965 and her MFA from the University of California, San Diego in 1974. Rosler has produced seminal works in the fields of photography,…