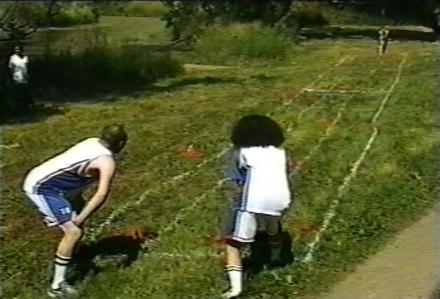 This program loosely organizes work by a number of artists who showed at Suitable Gallery a DIY exhibition space located in Chicago’s Humboldt Park neighborhood, during its 5 year run between 1999 and 2004. It speaks more of a community of artists than of a curatorial agenda. The process of selection and compilation began as a straightforward effort to survey all the video work shown at Suitable. Substitutions and omissions occurred in response to logistic and aesthetic concerns. The resulting program ultimately sought balance and watchability over purity or completeness.

The content is disparate and varied. There is no thematic or conceptual agenda, although several arise retrospectively which may reflect the tastes involved in Suitable’s original gallery programming. Subjects in these pieces include humor, failure, the abject and degenerate, the performative, roll playing, the body, art history, art spaces, art materials, counter-culture, process, time, death and love, to name a few. There is a tangible sense of utility in much of the work- they do not seem fussed over, they communicate directly.

A good example of this directness is found in Kirsten Stoltmann’s I Spill my Guts Everyday for Nothing, 2002. The trope of Hollywood special effect is combined with conventions of early Feminist performance video to darkly illustrate emotional vulnerability. The fact that Stoltmann is spilling ‘real’ guts, procured from a butcher, out of her duct-taped prosthetic tummy is almost too disturbing. The look of it is nasty, for sure, but we are only given a quick glimpse, as it slides out of the ruptured skin and hits the floor with a splat. It is in the extended view we have of her face that the true horror/ humor is revealed. As she confronts the camera, pallid and pasty, there is tension between her facial-expression and the resonant splat from guts hitting that black-and-white tile floor.

The hand-made and the disturbing come together again in the videos of Paul Nudd. Nudd is famous for brewing up pools of slime and mucous from art supplies and food. They are playful, like a child blowing milk bubbles, but the effect of viscous ooze quickly turns real, abject, snotty and stomach turning. Nudd managed even to disturb himself with his piece Worm Death, 2000, in which an anonymous phallic drone protrudes from a wet mustardy crevasse, and loudly oinks.

Artifice combines with the real in Charles Irvin’s 1999 video O’Malley’s Head- a long, trance-inducing piece about a baby and a head. Documentation of a cute, smiling baby playing with a ridiculous wide-eyed, decapitated head is edited to over-the-top Gerber-baby squawk, creating an experience that is kitsch and funny, but mostly just mental.

Macho-Shogun, 2000, by Reed Anderson and Daniel Davidson’s is an adolescent sci-fi fantasy brought to life with arge-scale Red Grooms-like sculpture craftsmanship. An entire city constructed from cardboard and paint is destroyed in battle between two robot-creatures (also made of cardboard and paint). In an especially dramatic slow-motion fight sequence, the hairy legs and wrestling-suit of a performer are sited through the sloppy seams of one of the cardboard robot suits. This humorous moment reveals the artists behind the action, contextualizing the performers and the scale of the set, and allowing us to remember that through all of the smoke and fire and smashing, this is a construct of ludic delight.

Another moment of play appears in Ben Stone’s High Five, 1999. This piece takes the form of a home movie, documenting some vague, low-stakes backyard sport. Three friends run a home-made track course and then high-five each other, with a cheesy digital effect for flourish. Everyone cheers and the piece is over in 40 seconds.

An interesting sub-narrative for this program can be found in the media itself. These works were made during a transitional time for video, as the standard was shifting from VHS to miniDV via Hi8 and Digital8. There was no home DVD authoring, and certainly no projectors. It is funny to think that most of the video shown back then was displayed on crumby little monitors with built-in VHS players. Tapes would be prepped for auto-rewind, and viewers would experience art through awkward apparatus.

Some of works literally embody these historical phases in their media identities, such as Shooter by Marc Schwartzberg, for which the conversion sequence reads Hi-8 to VHS to miniDV to DVD. This work is unharmed by degraded quality, which actually seems to enhance its slacker grit. Acts of half-baked posturing, sidewalk intimidation and spitting are captured on a shaky hand-held camera then set to the music of Motorhead. The resulting video reads like a C-grade A/V project made by a high school burnout… in other words, it’s perfect.

Other works reflect format conversions visually. Degraded resolution can reveal a history of over-dubs and bad signals. Sarah Conaway’s piece Two Dogs and a Ball- a cover of William Wegman’s piece of the same title from the late 60’s, gains from its degree of quality loss. In this case it is brought it closer to the chopped and fuzzy original. This lack of fidelity is kind of comforting- a magnetic patina for vintage moving images, evoking authenticity and contrasting today’s pixel perfect HD.

The newest work in the program is Inevitable (NTSC Version) by Siebren Versteeg, from 2008, which functions as a departure. Produced four years after Suitable closed, this piece was included to refer back to Versteeg’s 2001 solo project in the gallery but also to look ahead, thinking about the possibility for future manifestations of Suitable Video. This piece speaks poetically of the kind forward and backward technological trajectory that this program engages, traversing between old-school manual work with hands and tools, to low-res pixels and, eventually, high-definition multiplicity.

In 1998 I made a sculpture of a decapitated head. I featured it in a photo and video. I thought of the head as a character whose adventures would be documented. The name O’Malley was inspired by…

Double Sigh is a video in which my mother reenacts a moment from my adolescence. In confronting the viewer directly, my mother's anger, frustration and sadness are imposed on the audience. -- Julia…

Transcription of voice over from COOK: "I’m a chemist/I’m a cooker/I’m a manufacturer and a distributor/I’ll do whatever the fuck I want in the privacy of my own home."  A disguised and threatening…

This video is a 7-minute single channel piece consisting of two monologues: the first is a speech prepared for Richard Nixon in the event of a moon landing disaster in 1969, the second is the final…

I Spill My Guts Everyday for Nothing

Kirsten Stoltmann's video, I Spill My Guts Everyday for Nothing, is exactly that, a portrait of the artist spilling her Guts with a blank expression on her face. Again, Kirsten emerges as an…

Shooter explores the idea of overt manliness, exposing it to be a flaccid gesture and an exercise in posturing. In the video, I assume the persona of a metal head wandering an urban landscape, making…

Swamp Swamp and Wurmburth are each comprised of a series of tightly cropped shots of small, hand-made table-top sculptures or "sets".  Paint and many other materials that behave like paint (i.e.…

¡Macho Shogun! was created by Reed Anderson and Daniel Davidson over a single weekend some time in 2000.  It's your basic monster-robot / destroy-city kind of video that we wanted to make when we…

Two Dogs and a Ball

One of several videos the artist made with her brother while still in graduate school at the University of Illinois at Chicago. Two Dogs and a Ball is a cover of William Wegman’s piece of the same…

Miller & Shellabarger, their breath made visible by the cold of a refrigerated room, exchange breath with each other. This title is only available as an excerpt on Suitable Video, Volume 1.

High Five usually comes across as absurd and silly, and generally gets a laugh when shown. I appreciate this response and agree it is quite ridiculous on the surface. However few know the true dark…

Swamp Swamp and Wurmburth are each comprised of a series of tightly cropped shots of small, hand-made table-top sculptures or "sets".  Paint and many other materials that behave like paint (i.e.…

A grinding mortar and pestle vignette analogously describes the evolution of digital resolution; from a single color to a high definition image to an infinite splitting of that image back into the…