An intimate portrait of the artist at his home in San Francisco, this film delves into Mike Kuchar's life and work. The artist portrait explores, among other things, Kuchar's movie/music collections, his mysterious Casablanca editing system and the comic books, religious iconography and sci-fi memorabilia that fill the apartment floor to ceiling. 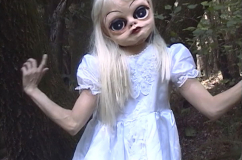 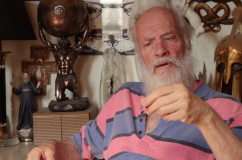 An Afternoon with Mike Kuchar

The VDB is excited to welcome the warming weather of spring (at least for those of us in the northern hemisphere) with a selection of videos by and about Mike Kuchar.

Mike Kuchar, cinematographer, painter and writer, was born (along with his twin brother, George) in New York City in 1942. Not so long after that, he began making movies and hasn't stopped since. Beginning in the early 1990s, he switched from shooting on film to primarily working with video.  He has made over 180 short video pieces in the past 30 years. Recently, Mike has been revisiting and re-examining his oeuvre and organizing these works into compilations. This is a fruitful way to enter his work, as the individual titles often speak to each other and build upon themes and patterns to create a comprehensive portrait of the artist.

Kuchar's videos are often surprising to the uninitiated. Conflicting and opposed motivations are woven intrinsically into their fabric. There is a surface level naiveté that is belied by expertly crafted editing and skilled cinematography. The videos are steeped in camp, but there is an earnest desire for connection that denies the cynicism camp often implies. Kuchar uses these deeply personal and interiorized videos as a way to sincerely communicate with the outside world. His work is often simultaneously humorous and melancholy, or joyous and perched on the edge of despair.

This program consists of a seasonally appropriate re-contextualized compilation of Kuchar's works, and is accompanied by Oscar Oldershaw's portrait of the artist. Kuchar’s Sunlit Sorcery (2022) comprising Echo’s Garden (2010), A Midsummer’s Nightmare (2008) and The Vernal Zone (2008) explores magical motifs and flirtations with the fae. Oldershaw's An Afternoon with Mike Kuchar (2014) is an intimate picture of the artist at his home in San Francisco delving into his life and work.